Past, Present and Future: The Magna Carta in Winnipeg.

Posted on August 7, 2010 | Comments Off on Past, Present and Future: The Magna Carta in Winnipeg.

It’s mid-summer in Winnipeg as I write this and the past is meeting the present while building for the future of the human race.  Since my last post about the Canadian Museum for Human Rights many things have taken place. Firstly, construction of the museum has progressed steadily,  so much that one can get a true sense of the enormous scale of the finished glass mountain on the prairies.  The idea being a visual representation of what man can attain when he aspires to a noble cause. 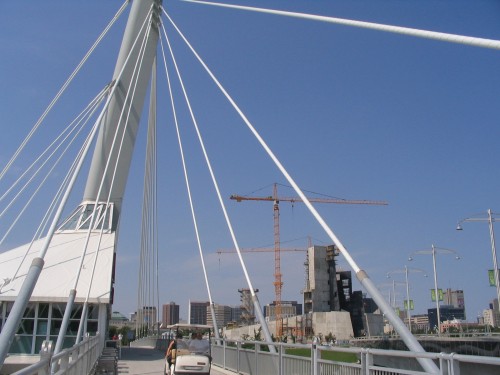 Walking over the Red River, the Size of the Buildings will be Enormous.

Up Close to the Building Site.

Secondly,  the Magna Carta, a milestone document that codified  English laws and doctrine to define basic human rights.  An original  is on temporary display in Winnipeg and accompanying it is the cornerstone for the new human rights museum.  The stone hails from a quarry in Runnymede, England where King John himself signed the Magna Carta into English Law in 1215.  The cornerstone is a gift from Her Majesty Queen Elizabeth II presented to the people of Manitoba during her visit on July 3, 2010.

Cornerstone for the Canadian Museum for Human Rights.

Visiting the Manitoba Legislature for me is always a thrill, not so much to visit the seat of power, but as a chance to visit a masterpiece of early 20th Century Masonic design.  According to Frank Albo in his book The Hermetic Code, the Manitoba Legislature follows a plan closely related to the Temple of Solomon in Jerusalem.  The building is filled with numerical curiosities and statues that would seem more at home in Greece or Egypt.  It is a building I never tire of seeing and I pick up more and more every time I visit.  But more on that for a later entry.

Is this a representation of the Ark of the Covenant below the Golden Boy?

Yes that is a Sphinx on the Legislative Building. But why is it there?

Two Massive Bison Guard the Inner Sanctum of the Legislature.

The Magna Carta  is housed on the second floor of the Legislative Building.  Open for all to see at no charge.  I believe that this house of government is one of the remaining few that the public is allowed to explore alone and at their leisure in North America.

Entering Room 200, a massive receiving chamber on the North of the building.  A lone guard sits watch over one of the most important documents in western tradition.  The document that for the first time in English Common Law stated that no free men should be imprisoned without due cause.  It also defines other basic freedoms that would go on to inspire works such as the Constitution of the United States of America. 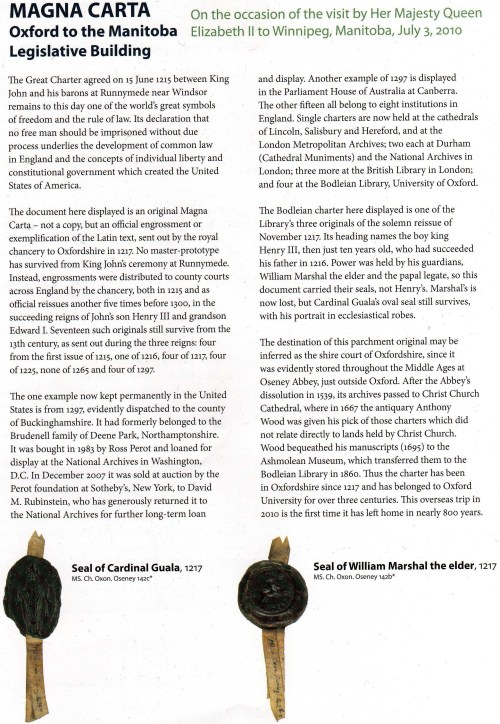 I truly found myself in awe of the weight of history in the room.  To think that I was gazing upon one of the fundamental documents that shaped the course of Western thinking and the structure of Western Law.   Also to have our Queen recognize the importance of the building that is taking shape here on the prairies.  Not so much a building but more correctly an idea, a monument to the aspirations of civil minded Peoples everywhere.  Also a reminder of the horrors that humanity can visit upon ourselves should we not heed a true and noble path.