Given that this coming week is Remembrance week culminating with Remembrance Day on Friday Nov, 11. I thought it fitting that I spotlight one of Canada’s and indeed Manitoba’s greatest fighting men.

How does a person sum up the life of one of the most decorated soldiers in Canadian history?  Especially when he was treated as a second class citizen in the country of his birth.

Tommy Prince, a direct descendant of Chief Peguis, was born into the Saulteaux tribe of First Nations people October 25th, 1915.  Growing up Tommy learned the skills that made him a legend of the Devil’s Brigade.  Hunting, tracking, marksmanship with a rifle and the ability to live off the land on his own for extended periods of time.

At the outbreak of World War 2, Tommy enlisted in the Canadian Army, although he was turned down a few times he kept volunteering and was finally accepted into the Royal Canadian Engineers where he was trained as a Sapper.  This highly skilled profession however was not a match for Tommy and he quickly enrolled into parachute school.  A posting that actually was a cover for the formation of the world’s first commando unit.

Tommy received jump training at RAF Ringway near Manchester, England and was part of a team that carried out special demolitions work in Norway in 1941.  Dubbed the First Special Service Force, officially the  unit did not exist.

In September 1942 Tommy and the Canadians of the First Special Service Force were absorbed back into the Canadian Army and joined the newly formed First Canadian Parachute Battalion and then moved to Fort Benning, Georgia where a joint Canadian and American elite unit was being formed.

This new unit although not typically thought of as a parachute battalion did school its soldiers in parachute jumping, but also advanced hand to hand combat, reconnaissance, tracking, bush craft, explosives, demolitions, stealth tactics,  mountain climbing and  amphibious warfare.  Everything that Tommy had learned up to this point fit perfectly with his new training.  He was one of a handful of the world’s first commando fighters.  Given a promotion due to his skill Tommy had all the necessary training to become a reconnaissance scout Sergent for the new unit.

All reliable accounts have Tommy first seeing heavy action with this new unit in Italy in 1943.  The unit was charged with taking out a number of German artillery batteries that had stalled the allied advance for weeks.  In order to do this they mounted an impossible mission. Under cover of darkness, they scaled thousand foot cliffs to avoid enemy patrols that blanketed the high ground.

In a battle that commanders predicted to last 4 or 5 days, the newly formed  FSSF managed to take La Defensa in under two hours in the rain on a cold and dark night.

During the battle of Anzio, Sergent Prince came into his own and distinguished himself as a fearless and inventive thinker.  Working to direct artillery behind German lines, Prince had set up an observation post in an Italian farmhouse, the phone lines that connected allied forward positions to positions in the rear became damaged.

Finding a set of farmers overalls, a hat and hoe, he set out during a lull in the fighting dressed as an Italian farmer tending to his fields.  In full view of the German lines Sgt. Prince inched his way along the line pretending to weed the field. Finding the break in the telephone line he carefully repaired the damage while pretending to tie his shoelaces.  Upon fixing the wire he shook his fists at both German and Allied  lines pretending he was an irate Italian upset with the damage to his land.  He then returned to the farmhouse and continued to give reconnaissance reports.  In all, spending 3 days behind German lines and within 24 hours of fixing the phone wires the German positions were knocked out and over run.

It was around this time that the Germans began calling Prince’s unit the Devil’s Brigade or simply The Black Devils.  The unit had begun leaving calling cards on their victims.  A  simple card or sticker left on the dead German troops, often killed silently and discovered later.  The card featured the red arrowhead insignia with  “DAS DICKE ENDE KOMMT NOCH“  written down one side.  The translation “The worst is yet to come”

In its short history the Devil’s Brigade accounted for 12,000 German casualties and the capture of some 7,000 prisoners of war.

So feared were the Canadian troops it is said that Joseph Goebbels is claimed to have uttered “If the Allies want to win the war all they have to do is give the Canadians a bottle of whiskey, a motorcycle, a 48 hour pass and declare Berlin off-limits.”

In all Tommy Prince was awarded nine military distinctions in World War Two.  The Millitary Medal was bestowed by King George the Sixth at Buckingham Palace in 1945. The United States honored Prince with the Silver Star from US General Koening on April 24, 1945. He most likely would have also received the Croix de Guerre from French President De Gaulle but the messenger delivering the recommendation was killed trying to deliver the message.

After the war Tommy returned home to Brokenhead Reserve, a town that neither admired him or his accomplishments in service to Canada. He worked in logging camps often drinking heavily on weekends.  After getting attacked by a drunken woman with a broken beer bottle at a dance, Tommy moved to Winnipeg and with the help of Veterans affairs bought a truck and started a cleaning business.

Tommy came back to a Winnipeg and Canada that didn’t give him as a Native the right to vote, or equal veterans benefits.  Determined to change things he was elected chairman of the Manitoba Indian Association working to improve conditions for Native peoples in Canada.  While away working on behalf of his people, his cleaning business, whom he had intrusted to friends was being run into the ground.  The truck was damaged in an accident and sold for scrap metal.  Having little choice Tommy returned to the logging camps.

With the outbreak of the conflict in Korea, Tommy enlisted into action once again, and once again served with distinction this time with the Princess Patrica’s Canadian Light Infantry (PPCLI).  His unit saw some of the fiercest fighting of the war.  Surrounded by Chinese regulars they defended Hill 677 surviving overwhelming odds in the battle that would become known as Kap’Yong.  Fighting day and night against hordes of Chinese troops often relying on vicious hand to hand combat and precision air drops to keep them supplied.  The Chinese were so bent on taking the hill that at one point the embattled PPCLI had to call in artillery fire onto their own position to halt a Chinese advance. 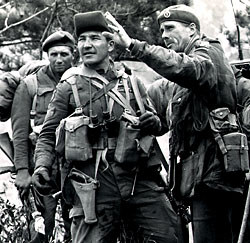 Sergent Tommy Prince before going on patrol in Korea

Back in civilian life Tommy once again found it hard to adjust to the mean streets of Winnipeg.  Stricken with arthritis and rampant discrimination he became estranged from his family and fell into the trap of alcoholism selling off his treasured medals in order to sustain himself.

He died at Deer Lodge Veterans Hospital in Winnipeg in 1977, alone and virtually forgotten, but things are looking up for the memory of this brave and cunning man.  A recent resurgence in his history has swept the city in recent years, with murals and statues to his honor.

His medals have been gathered from the four winds and brought back as a collection once again.  It is also rumored that Manitoba’s own First Nations star Adam Beach is planning a movie on the life of Tommy Prince.

All well and good for the most decorated person of native decent in Canadian Military history.