Festival time is almost upon us again my friends and I know how much all of you like my photos of all the festivities that run and all the snow sculptures that are carved lovingly during it’s annual February run.

So once again here’s a sneak peek at some of the work going on around town to get St. Boniface in a Hé Ho frame of mind.  Some of these pictures are continuations of works that had begun last week in my  “A day in the life” photo journal and from “60 years on a hard throne“.

Here at the mint work has been completed on the Winnipeg Jets Logo Coin.

Here’s the flip side of the coin. A bison standing in relief.  Sadly facing due south so a great deal of the definition has been removed by our unseasonable temperatures. 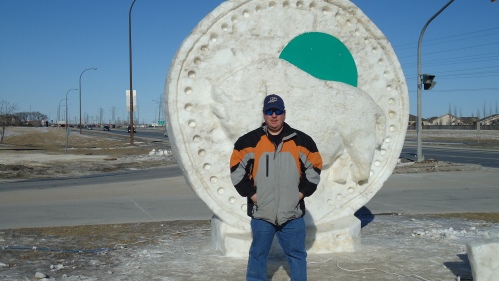 Some goofball standing in my shot.

END_OF_DOCUMENT_TOKEN_TO_BE_REPLACED

Posted in Why Winnipeg Rocks!, Winnipeg and Hometown Goings On, Winnipeg Events

Going For Olympic Gold in Winnipeg

Posted on February 13, 2010 | Comments Off on Going For Olympic Gold in Winnipeg

Before I get a ton of mail saying, Bob are you daft?  The Olympics are in Vancouver this year.  Yes, I would reply,  indeed the games are in Vancouver.  But did you know that the medals themselves were crafted by the Royal Canadian Mint.  Which just so happens to operate in two locations, our nations capital in Ottawa and my home town of Winnipeg.

Although the medals were physically crafted exclusively at the Ottawa facility;  it was through a collaborative effort between the two sites that the medals were formed.  Winnipeg being a partner in the crafting of the medals played host to a special display of the process and product.

Driving up to the world-famous glass structure on Lagimodiere Blvd., we were greeted by a snow sculpture, carved in tribute to Canada’s hosting of the 21st Winter Olympic Games.

END_OF_DOCUMENT_TOKEN_TO_BE_REPLACED

Comments Off on Going For Olympic Gold in Winnipeg