When people sit around and talk about the average 70-year-old person certain things tend to come up in the conversation.  Retirement issues, health concerns, loss of hearing and perhaps even ambition.  For the exceptional pensioner they may talk about vibrancy and youthful appearance despite the age.  One thing is for certain though Paul McCartney does not fit into any group labeled ordinary.  I count my lucky stars that I have now seen this living legend twice and by all reasonable standards he just keeps getting better and better with age.

Let’s face it Paul is a rock and roll icon of the highest order and now into his 7th decade could very easily rest on his laurels and slip most contentedly into obscurity.  The fact that this ground-breaker and might I add billionaire chooses to go out on tour again speak volumes.  One of the most critical things I look for in any performance is whether or not the principals are enjoying themselves and I can happily report that it sure seemed like Paul and his band mates were having a blast on stage in Winnipeg! 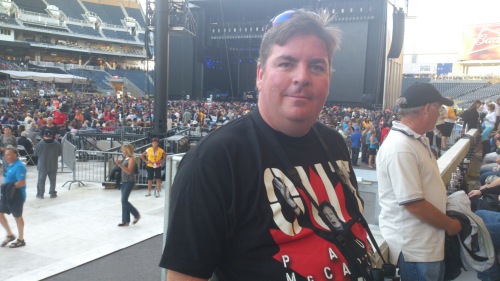 Yours truly waiting for the show to start! 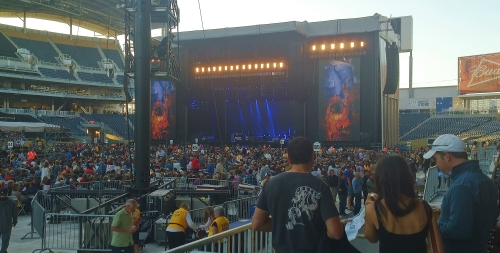 Darlene and I sat midfield in the lower bowl of the stands giving us an excellent wide-angle view of the entire stage setup. Two huge High Definition screens flanked either side of the stage helping with close up views of the band.  The evening began with cover versions of Beatles tunes played in time with a scrolling montage of kaleidoscopic images of Paul though out his life.  At 8:30 sharp the band took the stage to thunderous applause from the 31,000 in attendance.  The audience, as one would guess, spanned the age spectrum.  Families with children hand in hand eyes wide with wonder at the unfolding spectacle, teens decked out in tight shirts and silly grins.  Older women and gentlemen seeking to recapture their youth in the songs bound to be sung that perhaps they courted each other to.  The crowd had it all. 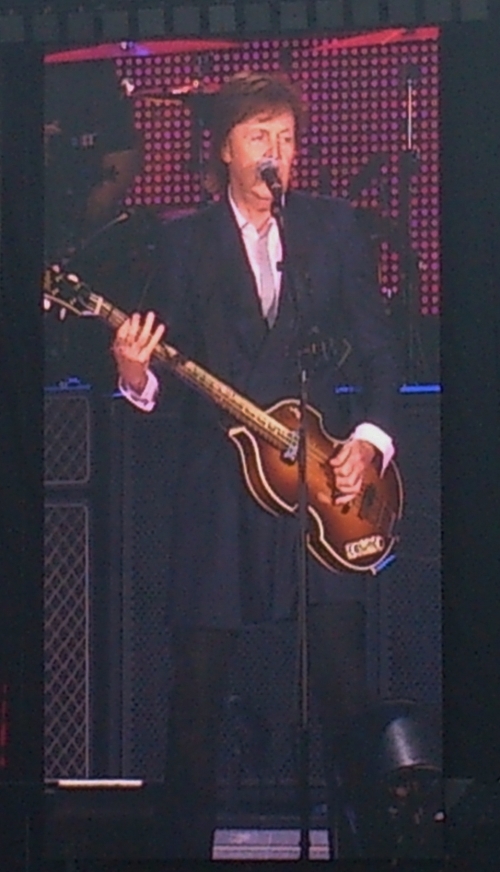 Paul McCartney on stage in Winnipeg 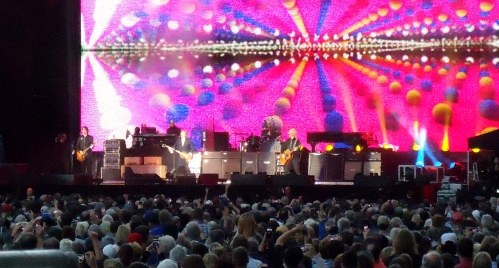 Paul Takes to the stage with 8 Days a Week.

Eight Days a Week, and Junior’s Farm opened the show, with Paul stopping often to banter on with great ease and a sense of familiarity of our Winnipeg.  Commenting on how welcome he felt and letting slip a little tidbit for the trivia hounds how he had met the promoter for his 1993 show this time around and was surprised that Sam Katz had become Mayor of Winnipeg! 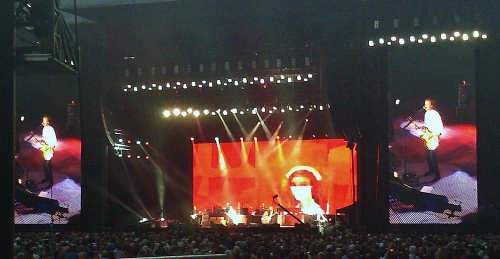 As he played on and on in the first half toe tappers such as Let me Roll it included a tribute to one of Paul’s old friends Jimi Hendrix with Foxy Lady. Recounting a 60’s night in London where The Beatles saw Hendrix play Sgt. Pepper’s Lonely Hearts Club Band only days after the album had been released.  The result was Jimi playing so hard that his guitar went wildly out of tune. Paul tells of Jimi yelling out into the audience for Eric Clapton to come up on stage and tune his guitar for him!  Imagine being in that room in London on that Sunday night!! 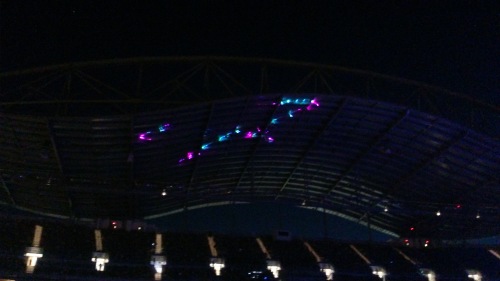 As it turns out this tour features many songs from the Beatles that haven’t been played live in Canada ever! Being for the Benefit of Mr. Kite and All Together Now were great nostalgic pieces.  The addition of Eleanor Rigby sent a shiver through my spine and Helter Skelter in the band’s second encore sent me into ecstatic overdrive! 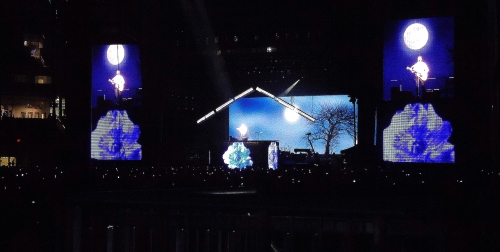 Paul also touched on his social activism in the 60’s and 70’s telling how Blackbird was meant to give hope to the oppressed black people of the American south.  We all had the rare opportunity for a sing along with a Beetle during Ob-La-De, Ob-La-Da and the unforgettable Hey Jude!  Somehow he even found time to do tributes to love and motherhood With Maybe I’m Amazed, And I Love Her, Your Mother Should Know and Lady Madonna.

Songs flowed effortlessly from his collected works even pausing briefly to bring out a gift from his departed Beatles band-mate George Harrison, of all things a ukulele and proceeded into Something.

One thing that I really appreciated on this tour was the quality of the production. The sound quality in Investors Group Field was almost album quality!  I made a mental note of Day Tripper and how good it sounded.  The lower end of the sound was particularly rich and sounded great.  It’s a complement to the enduring quality of the songwriting and composition skills of The Beatles that simply with adding modern equipment and little else a 45-year-old song can just blow your socks off! 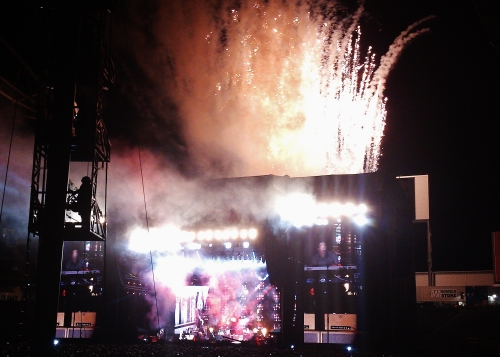 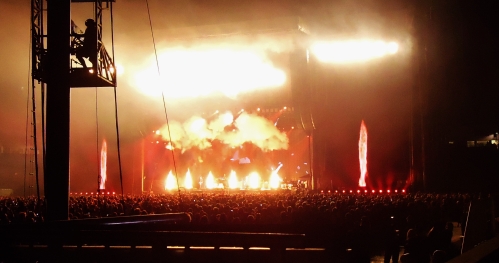 Fire and Thunder fill the air for Live and Let Die! 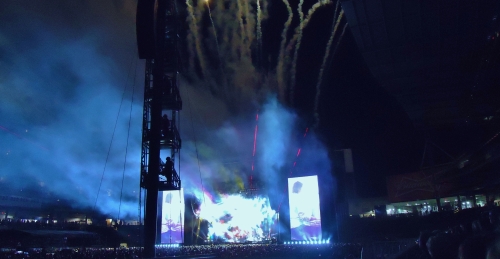 Wide angle shot of the stage with smoke and lasers!

With my socks gone, Paul and the boys blew my mind with an explosive version of Live and Let Die preceded by Let it Be and Back in the USSR.  The show covered every base and left no stone unturned.  When Paul came out for the second encore of the night we could tell that the show was drawing to a close.  But the band had a few tricks up their collective sleeves still, performing Yesterday to an eager crowd still eager to sing along.  Acoustic guitar still donned and joined by accordion Paul launched into the somber Mull of Kintyre midway through the song the sharp snap of snare drums filled the air followed quickly by the scree of bagpipes as the Winnipeg Police Service Pipe and Drum Band marched on stage.  The crowd went bonkers, applauding wildly for the home grown Winnipeg pipes and drums. 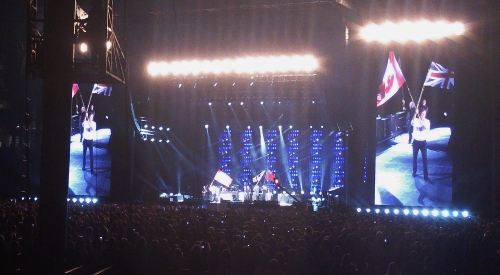 Paul showing off our flags before the 2nd encore

Finally the night had to come to an end fitting enough with a nonstop version of Golden Slumbers/Carry that Weight/The End. Climaxing with the boom of cannons, the shimmer of fireworks blasting into the clear night sky and red and white confetti billowing out into the furthest reaches of Investors Group Field.  For a man in his 70’s Paul provided a seemingly effortless 3 hour performance.  Was he always pitch perfect? No. But did he give a performance that 31,000+ fans from Winnipeg and beyond will remember for the rest of their lives?  Fans bursting with emotion and joy, beaming with pride at being able to say they saw and sang along with a Beatle. The answer is an overwhelming YES or as Paul would say Oh, Yeaaaaa!

Confetti and fireworks fill the air!