Movie Review: Skyfall is simply the best Bond film ever.

Ok, I am admittedly a huge Bond fan going back to as far as I can remember.  I loved the camp of the Roger Moore years before I knew any better and then I learned to appreciate the fierce ruggedness of Connery as I grew to learn the earlier films.  Hell I even appreciated Lazenby in On Her Majesty’s Secret Service. 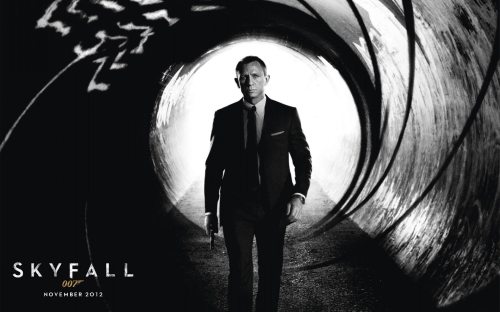 I loved the back to basics Bond that Dalton created on screen, even if the stories were a tad weak given the political climate at the time.  I did struggle with the Brosnan editions finding them a bit too close to Moore as I matured.  Yet I was in the theater every opening weekend.

I know I made a bold, almost outrageous statement saying that Skyfall is the single best James Bond movie of all time; but it’s one I am going to stand behind for several reasons.

The first being the camera work and direction by Sam Mendes.  The Imax version that Darlene and I were treated to courtesy of the Winnipeg Free Press was absolutely stunning.  From the car and motorcycle chases of Istanbul, shown in stunning glory,  running across the grand bizarre full speed is breathtaking.

The dark Blade Runner-esque skylines and neon of Shanghai, the opening sequences on the Dragon Barge in Macau were simply breathtaking.   That alone makes it one of the best 007 movies of all time.

The next point is more central to the plot, we see that James Bond is human.  He’s a beat up aging man not on that happy side of thirty something anymore.  He’s ragged and grey bearded.  He suffers and struggles to maintain his rating as a double zero agent.  You feel for him as he works and fails, his addictions have cost him a steady hand, he shakes and sometimes fails to hit his mark. But this all work in the favor of the movie to establish who James is as a person and not just a iconic figurehead.

Javier Bardem plays the role of a uniquely suited rogue agent once under the care of Judy Dench’s M.  The homoerotic undertones of his character play off the raw sexuality of Bond in unique ways.  But never forget that he is out for revenge on the spymaster that gave him up to a foreign power for endless torture.

Gone are the campy gadgets and silly hidden bases in volcanoes, this is a striped down 8 cylinder full bore version of bond at his best.  Even though a very young Ben Whishaw is appearing as the Quartermaster of gadgets he manages to pull of a surprise or two with a nod to the past Bond films as well.

There even is an surprise appearance of an old Connery acquaintance that really brings the tone of then move up more than a few notches at a very dark and dangerous time in the film.

In the last act we learn more about James Bond as a boy, growing up in the moors of Scotland.  An orphan of young age who lost his parents in a climbing accident.  Albert Finney rounds out the last final segments as a bridge to the adolescent James and his growing anger into manhood.

From the bustling city of Istanbul, to the Blade Runner shots of Shanghai,  breathtaking scenes in Macau and unbelievable action in London.  The humanity of James the child, and brutality of Bond the man.

I see no reason not to score this the 23rd film in the bond treasure trove a solid  4.5 out of 5.  The only reason I am holding back the extra half is hoping for more in the next Daniel Craig installment.

As always Bond Will Be back.

4 responses to “Movie Review: Skyfall is simply the best Bond film ever.”