The Peasant Cookery: More than a step above the ordinary.

A few months ago I was doing some volunteer work with a group for men wanting to change their lives.  The work itself was incredibly rewarding but little did I know that I had gastronomic reward also waiting for me.  At the end of the course our group facilitator Mel handed me a thank you card for all of my efforts.  Inside was a gift certificate for any number of city restaurants in the WOW! chain of establishments.  But this certificate came with certain restrictions.

In her patented stern yet amazingly gentle way Mel informed me that I could use the certificate at any one of the WOW! restaurants as long as I chose The Peasant Cookery.  During the course Mel and I had often talked about our passions for finding great meals separate from the throng of mundane chain establishments that seemed to be sucking the life out of the Winnipeg dining scene.

In any case when I arrived home from work yesterday I could tell that Darlene was itching to go out on the town for dinner.  She suggested Hermanos, an all time favorite steakhouse of ours, until I remembered that gift certificate I had tucked away in my wallet a few months ago.  I suggested the Peasant Cookery and within minutes we were out the door and headed down to the exchange district in search of a great meal.

The Peasant Cookery in the 105 year old Traveller’s Block.

With parking secured we strolled the few blocks to the Peasant Cookery taking in the sights and sounds of the bustling district.  Winnipeg’s exchange district lays in the oldest section of downtown, hundred year old warehouses and factories make up the majority of the red brick buildings that harken back to a time when Winnipeg was a trading hub that rivaled Chicago. 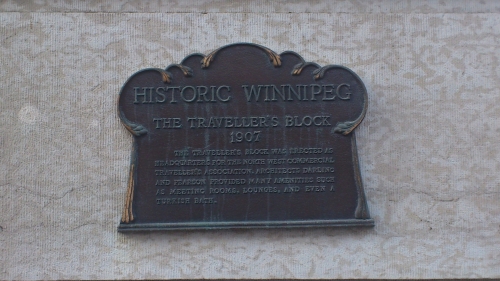 The Peasant Cookery housed in one such building, the 105 year old Travelers Block.  Upon entering the illusion continued as we were instantly greeted by maitre d’hotel Richard, our coats taken and whisked away to an awaiting table.  Our hostess very professionally saw to our beverage and menu needs all the while singing the praises of her favorite dish, a stuffed pork chop. 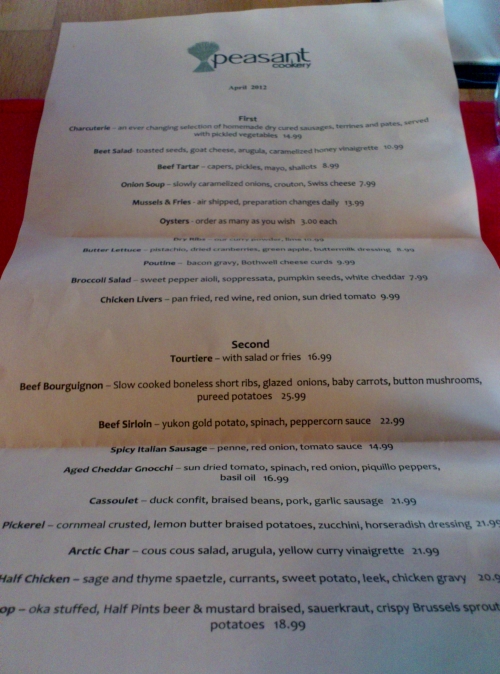 Once seated and sipping our drinks, Beth our server for the evening magically appeared to consult us on the menu options. For starters Darlene chose a very appetizing sounding portion of house rubbed dry ribs.  While I decided to get a little crazy and order oysters on the half-shell and a crock of french onion soup.  For mains we were convinced by a charmingly persistent Beth to try the oka cheese stuffed pork chops.  She claimed they were without peer and tender and juicy to a fault.

Interior of The Peasant Cookery.

It was around this time that the restaurant began to fill up, normally signalling a sharp decline in service.  However the at the Peasant Cookery this was definitely not the case.  If anything service improved, our water glasses and fresh bread basket being tended to by no less than 4 of the serving staff.

In short order our starters appeared, Darlene was impressed with the  taste of the dry ribs commenting on the subtle yet effective seasoning the tender meat.

The remains of my oysters and awaiting french onion soup.

My choice of oysters and soup also impressed, the fresh briny oysters were accompanied by sea salt, lemon and a red wine balsamic sauce.  Personally I prefer my oysters straight up and clean although the balsamic solution did add an acidic bite that many would appreciate.  The french onion soup was classic in it’s preparation sharp high quality Gruyère cheese coating a crock of thick and rich onion soup.

It was about this time that  Richard reappeared to check on our progress, it always impresses me when a general manager takes a hands on role in the management of the floor, a task that Richard excels at.  He even inquired if I would be removing a strip off his hide if I wasn’t satisfied.  A reference to a joking comment I had made while entering earlier.  I told him to rest assured that given the level of service and our satisfaction with the food that his hide would indeed remain intact.

A short wait later our mains arrived, a perfectly french cut pork chop bathing in a delicate sauce derived from Winnipeg’s own Half Pints ale.  A nest of sauerkraut sat atop each chop with roasted Brussels sprouts and whipped potatoes gracing the outside rim of the plate. 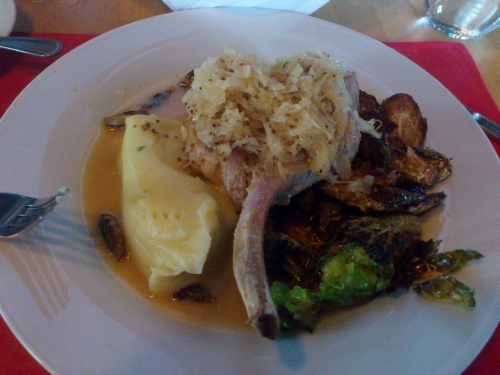 True to their words the chops were tender and tasty.  Even the Brussels sprouts were delicious, I actually had mistaken them for tender young roast potatoes at first.  The sauerkraut topping lent a familiar German flavor to the dish reminding me of smoked Kasseler pork chops. Once again service staff were buzzing everywhere and upon seeing not one but two of the oka cheese stuffed chops on our table they to a person agreed that they were the best dish on the menu.

When I inquired how the pork was cooked to such perfect temperature, just slightly pink, and yet remained so moist they summoned Richard to our table.  He explained that the pork and some chicken dishes were cooked in a sous-vide preparation and then quickly seared off at the end to add some colour to the meat.

I must remember to thank Mel for her gentle prodding and the management and staff of The Peasant Cookery for a wonderful and eye-opening dinner experience that is definitely a step or four above regular dining in Winnipeg.

8 responses to “The Peasant Cookery: More than a step above the ordinary.”