As we begin to get together for the holiday season with family and friends I want to put a little nugget to think about in your brain.  Does religion encourage intolerance of those who are different?

Let’s say for example you’re with the extended family over the break and your favorite uncle or auntie who has maybe had a few too many comes over and attempts to debate how wrong (value x) is.  Let’s also say since they are recently born again into the religion of their choosing, they start to fling bible quotes to back up this belief of hatred.

How do you respond and what are you thinking?  Now before we all get our panties in a bunch I understand that people of all stripes read this column of mine.  My basic philosophy has always been to try to think independently of a central voice, (religious, political or social dogma) gather the facts and make up my own mind on the issue.

The reason that I am bringing religion into the picture here is that I can’t think of a force that has wreaked more havoc in the history of humankind.  Wars are fought over religion, countries are founded upon it’s tenants and wholesale persecution is often preformed in it’s name.

Yesterday someone very near and dear to my heart started up with the whole Adam and Eve not Adam and Steve rant against homosexuality.  She tried claiming that the bible was clean of such acts of “perversion” when in fact it is not.

I tried to explain that one of the central beliefs of the bible, to my mind anyhow is inclusion of all things into understanding and love.  I was raised Christian so I tend to think along Judeo-Christian  lines, although I do know that most other world faiths also have a bent towards inclusion over hatred at least in the scripture if not in application.

I guess that’s where I am going with this, if your holy book be it the Torah, Holy Koran or Bible commands you to love your neighbor as yourself why do we have all of this insanity going on in a benevolent creators name?  I can tell you with some certainty that from a historical point of view the answer is control.

Religion was and is certainly being used as a control method around the world today and this tendency is not linked to any one religious belief.   Most religious belief structures use a carrot and stick philosophy to guide their believers.  If you do as the clergy says and you’ll have a thousand joys in the afterlife go against us and you will surely burn or be tortured for all eternity.  Oh, and anyone that doesn’t believe what we believe is wrong and of course will end up on the pointy end of a pitchfork so let’s be mean to them now just for good measure. 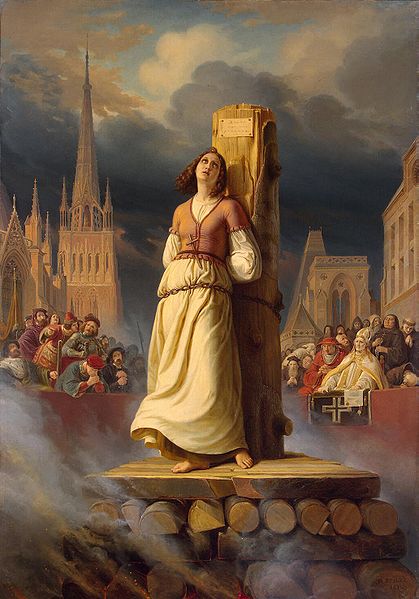 Joan of Arc burned as a heritic

Of course this is an oversimplification but try telling that to the “witches” hanged or burned at the stake in Salem and throughout history.  The Jews, Muslims and Homosexuals put to the rack during the Holy Inquisition. Try explaining that to the Roma who wander Europe without a home or the young women who are mutilated or murdered in the name of Allah for trying to get an education and a better life.

Tell those targeted by a supposed holy man Fred Phelps and his congregation who proudly proclaim “God HATES Fags!”  Well Fred my God is a loving caring creator, my God made the world and loves everything about it.  My God is inclusive and does not know hate.  My God is above hate, my God is about Love.

Two young men get back at Fred Phelps

Isn’t that what this time of year is all about?

“Glory to God in the highest, and peace on Earth, good will to all men.”  Luke 2:14 King James Bible