The Winnipeg Jets are finally starting to find their wings.

Posted on December 4, 2011 | Comments Off on The Winnipeg Jets are finally starting to find their wings.

Last night Dar and I were lucky enough to take in our second Winnipeg Jets game of the year.  It is easily one of the hottest tickets in town now and any chance we can get to take in a game we obviously jump at.

Tickets to the Jets vs Devils game.

We joined 15,000 other rabid Jets fanatics for the chance to cheer for our team and jeer the antics of the struggling New Jersey Devils.  Looking at the stats for both squads before the game I noticed that both the Devils and Jets were sitting right around .500 on the year so it could be anyone’s game.

Being no strangers to the Winnipeg sports scene we knew to arrive early to beat the crowds and grab a bite to eat outside the arena where prices are needlessly inflated. Winnipeggers may be sports fans but we are also ruthless in our search of a bargain.

After a quick bite in a nearby mall food court we headed in to grab our seats, everywhere you looked the shiny new logo of the Jets was worn with pride.  Hats, sweaters (jerseys), and even scarves were on display.  A mix of the old logo and the new logo helped to give the crowded thorough fare some definition. 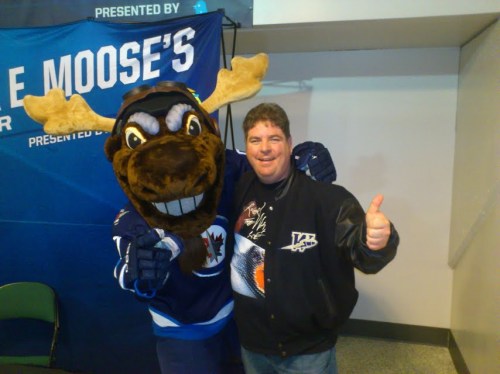 Mick E. Moose and I give a big thumbs up before the game!

As we settled in our seats pregame the lights dimmed and the Jets logo appeared on the ice.  Our attention was drawn upwards to the score clock hanging over center ice.   Throbbing music and an absolutely fantastic video took the already hyperactive sold out throng to the next level.  “15 years ago we lost a team, but we didn’t lose passion, and now our team is here to stay”   A montage of CF-18 fighter jets and Winnipeg Jets players flashed before our hungry eyes.  Every one now standing and clapping, cheering as loud as they could.   “This Team is Fueled by Passion“

As the final note hit, the players streamed out of the gates and onto the ice. All I can say is wow,  this ownership group is slick and want everyone to have a great pumped up time.

As for the game, the Jets are finally starting to play together at a level that Winnipeg demands.  The hits are hard but fair, the shots are getting accurate and on goal, the defense is making the opponents challenge at the blue line to gain the zone.  All in all for a club that really hasn’t had much expected of them in Atlanta they are rising to the occasion here in Canada. 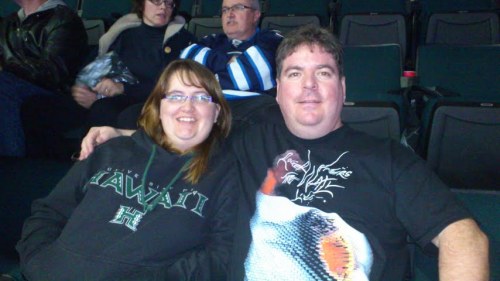 Dar and I in the stands

The Jets battled hard last night to beat the New Jersey Devils by a score of 4-2.  Keep it up boys, play your assignments and give Evander Kane and  Andrew Ladd some room out on the ice to score some goals.