Yes, yes I am a day late with this and I do apologize to everyone who swarmed my page last night looking for the latest on The Winnipeg Jets logo saga.  The wait is over my friends and the Jets are indeed  ready to fly high and proud with a new corporate identity.

The new logo borrows highly from the Royal Canadian Air Force insignia that has graced our fighter planes for over the last half century.  Wanting something brand new and not reliant on the Winnipeg Jets logos of old was critical Mark Chipman explained in the launch ceremony.  The new logo dates back to the 1948 RCAF Flyers Hockey Team, a team cobbled together to compete in the Olympic Games in St. Moritz, Switzerland.  Our air force players competed as amateurs and brought home the Gold Medal with a victory over home team Switzerland and an edge in goals over second place Czechoslovakia.

The new logo also works in the relationship the City of Winnipeg has with its armed forces here in Manitoba; home to 17 Wing. The Jets logo features a stylized CF-18 fighter jet over the bright red maple leaf, while the side patches call to mind a flight captain’s wings.  All sporting teams here incorporate an armed forces day into their game schedules and Chipman’s AHL Manitoba Moose were no different.  Their armed forces game day sweaters also paid tribute to the RCAF and the sacrifices they made. 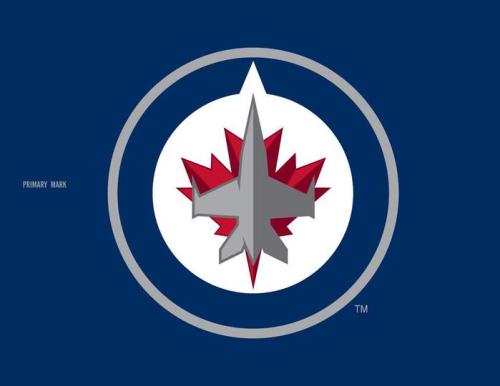 This new logo brings all of those traditions together while also incorporating a nod to the True North Enterprises logo of a stylized compass pointing due north.

I must admit that I wasn’t personally too thrilled to see the new design, I thought that it borrowed from the military roundel too closely but after having a night to sleep on the new motif and the reasons for the design I think that the city is more than ready to get our boots polished up, our brass shined and welcome this new team and its new identity to the city and province.

Let’s get ready to hit those afterburners and go supersonic.  After all these are our Winnipeg Jets!