Hello Edmonton, and points beyond.  The U2 360 show is heading your way, get on your boots and hold on to your hats.  It’s going to get loud!

My seat before the May 29th show

I was at the Winnipeg show this last weekend and I am just starting to recover in any serious way.  Maybe it’s my age, maybe it’s the extreme number of concerts I have under my belt.  But honestly I think it’s all just good fun and excitement. 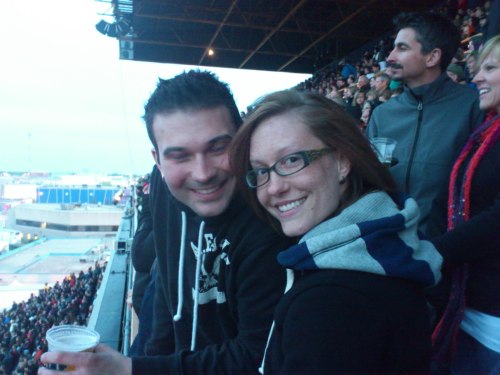 My seatmates LB and D

My friends and family in Edmonton are going to have an excellent time tonight and here is what they can expect. 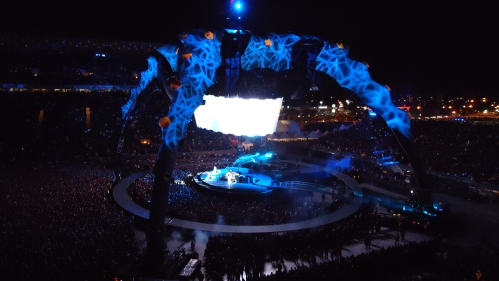 U2 Claw in Blue

Firstly, be ready to be totally overwhelmed.  This stage set up is unlike anything you have ever seen before.  Trust me it’s the biggest stage currently on the planet,  over 150′ tall and over 40 yards square on a Canadian football field. This stage takes almost a week to set up and a week to take down.

U2 Claw in Red

Secondly, U2 is all that and a bag of chips.  Since getting poor reviews in the early years, Bono and group have tossed all care to the wind becoming the biggest nastiest band on the planet.  Yes KISS you can put your dragon boots away you officially are once were’s.  I have been to both shows multiple times and sorry Gene that make-up is just tired and your stage show is so 70’s.

So about social conscience, yes U2 we get that you are a political band and that you speak to world issues but playing to the heartland of North America and showing Islāmic script and images of Intifada during Sunday Bloody Sunday I think confuses mainstream Canada. Yes we get the fact there is a struggle but given the facts of our soldiers fighting and dying now it’s not a good choice.  I know you pick your battles Bono, but if you want to get people with cash and resources behind you I suggest you pick them better.

However I totally agree with the U2’s support of Amnesty International.  A peace loving and totally worthy organization.  The candle lit procession in support was beautiful and appropriate.

In short, Edmonton and points beyond.  Get on your boots and hold on to your hats.  Cause these boys are going to try to blow them off!!  No kidding, it’s been 4 days and my ears are still ringing and my legs are still aching.

U2 rocked Winnipeg and they continue to rock the globe!

This entry was posted in Uncategorized and tagged 360, Adam Clayton, Amnesty International, Bloody Sunday, Bono, Canada, Derrick, Edmonton, Elevation, Larabee, Larry Mullen Jr, Manitoba, Politics, U2, U2 360 Tour, U2 Photos, Winnipeg, With or Without You. Bookmark the permalink.