Well if you’ve missed it, been hiding under a rock or just were busy getting on with life in general, today is Judgment Day!  No you don’t have to go to court, stand in line or generally be annoyed by one of our many legal systems because All Mighty God is coming to YOU!

Well at least if you believe in the whack-a-doodles over at the Family Radio Network.  Harold Camping and his bible revisionist flock are guaranteeing the end of the world.  (Guarantee not valid outside of crazyland.)  For the last few months Camping’s group has spent untold dollars posting billboard ads around the world, some 3000 at last count including 85 or so in Canada, proclaiming the beginning of the end of the world. 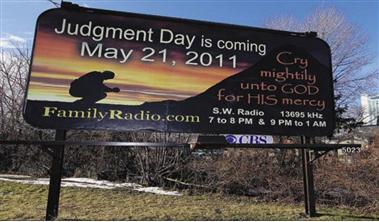 Now this is not the first time that Harold Camping has pulled this stunt his first prediction for the end of the world was in 1994, and his reasoning for the world not ending was he apparently got the divine math wrong.  Like a the silly man that he is he apparently was using the wrong calendar to make his calculations on.  Now he’s got it figured out and is using the Hebrew Calendar and so strongly believes in his number skills that he’s putting an iron clad guarantee on it.  What that guarantee includes I have no idea, but I’m thinking that I was smart not to run up my credit line.

The thing that I just don’t get about Christian Revisionists, yes I said Revisionists, is the way they see fit to modify the bible in any way they see fit.  Take for example the writings of Tim LaHaye, his fictional account of the end of the world in the Left Behind novels has been accepted as fact by many in Christian fundamentalist movements.  Indeed the idea of The Rapture, is a fairly modern idea.  This Star Trek like idea of bodies being transformed into spiritual energy and flying off into heaven en masse is taken from ONE passage in the bible.

For if we believe that Jesus died and rose again, even so them also which sleep in Jesus will God bring with him. For this we say unto you by the word of the Lord, that we which are alive and remain unto the coming of the Lord shall not prevent them which are asleep. For the Lord himself shall descend from heaven with a shout, with the voice of the archangel, and with the trump of God: and the dead in Christ shall rise first: Then we which are alive and remain shall be caught up together with them in the clouds, to meet the Lord in the air: and so shall we ever be with the Lord. Wherefore comfort one another with these words.

From this one passage in the King James Bible a whole industry has been born.  One dedicated to the spreading of fear in the name of God.  But what can I tell ya fear sells!  Don’t believe for a minute that Camping and LeHay are not rolling in cash.  In times of uncertainty and desperation there are always those who will prey on those looking for guidance and a helping hand.  For those of us in the western world that’s been the Church.  Now before I start getting mail saying I am anti-religion just hold them horses for a second.  I wholeheartedly  believe in a faith-based institutions rooted in family, trust and betterment of society.

What I don’t agree with is this fundamentalist notion of Church and gift shop.  Come to worship and don’t forget to pick up the latest novel in the Left Behind series!  That just doesn’t seem kosher to me.

When we as mere mortal beings start picking and choosing who will be let into the afterlife and announcing the unknown as fact then my friend you are on shaky ground.

In response to this outrageous attack on the intelligence of those gifted with a working brain, the wunderkinds over at Gizmodo.com have come up with a most excellent prank.  Let’s punk the rapture day, is a prank designed to make people believe that the rapture is happening as the Christian right would have us believe.  By taking a full set of clothes and laying them out as though your body had just disappeared to give the impression that you have been called into the heavenly kingdom. 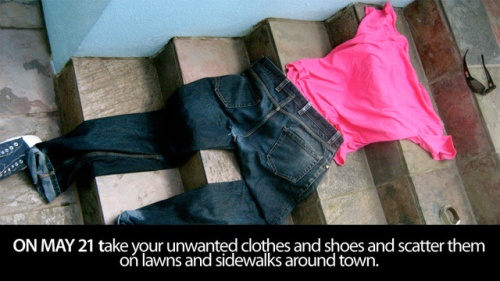 Whatever you believe, please have a most excellent day, and be good to one another.  I think that’s what the point of the New Testament is in any case.

For more on this story check out these great links.

Explaining The Rapture to children

Ivy Blaise’s there are only two things you need to worry about.