Finally a chance to sit down and write again for a little while, things have been a bit crazy here this last week and as such I missed my normal mid-week post.  I do apologize for that.   But on the happy side, spring is hurrying hard to get here and the melt is on.  I just hope it’s slow and steady, otherwise the flooding could get real nasty here this year.

As the title implies I have a small book review for everyone today.  Gabrielle Hamilton’s first major effort in the food writing genre.  Blood, Bones and Butter tells the tale of how she came to own a small highly regarded restaurant just outside the Bowery on Manhattans Lower East Side. 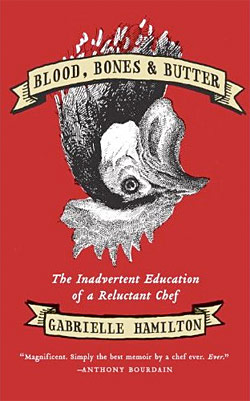 Much like Chef Marco Pierre White (White Slave) and Chef Anthony Bourdain (Kitchen Confidential), Gabrielle Hamilton suffers a confused and painful adolescent period.  Eventually falling back on the skills she’s learned as a child in her mother’s kitchen when she finds herself virtually abandoned during her parents divorce.

She quickly learns how to hustle, steal and con her way into a series of jobs that ultimately lead her into the high volume catering kitchens of New York City.  Finding time and time again that comfort of familiarity in prep work and the characters who always fill the lower rungs of industrial cooking.

The book is only semi-linear in it’s telling of Gabrielle’s life, often changing gears to flash back on adventures in Europe or as cook at a summer camp for privileged city kids.  From living on travellers cheques in cold hostels, sleeping with one eye open in Amsterdam, to the warmth of family friends in rural France.  From starving in foreign lands with no cash, where a boiled salted potato is a feast for the senses, to experiencing the bounty of simple food cooked without pretense in France, Greece and later Italy.

These influences, along with her happy childhood memories of the family lamb roast where half of the small Pennsylvania community of her childhood would show up, formed the backbone of what would become her restaurant Prune.  Food cooked Gabrielle’s way to a high standard but unforced by fickle convention.  There are no tortured dishes where food is squeezed into rings to dance for the patron, just good simple fare.

The book also touches on Gabrielle’s personal life, most confusing is her transition from being in a committed live in lesbian relationship to having a very complicated almost stand offish relationship with her Italian husband Michele.  The longing and need in her heart never seems to be filled, only quenched from time to time.

Many people have already drawn comparisons between Blood, Bones and Butter and Anthony Bourdain’s Kitchen Confidential and yes I did feel a certain resonance between the two.  Although Bourdain, on the book’s jacket, claims his own writing to be completely outclassed by Hamilton’s.

The two did both share certain parallels dancing on the fine line of legality earning their bones in the sweatshop kitchens of New York City.  Both have a personable writing style, it’s almost as if you the reader are seated at their feet as they tell the tale of their life’s work.

But beyond that Gabrielle’s tale is uniquely her own, much like her cooking I would imagine.  It is the rendered and stewed rich broth that is her life.  One that personally I can’t wait for another helping of.

Authors Note: In doing the research for this post I stumbled upon a YouTube channel which captures the book release press conference featuring a candid discussion between Gabrielle Hamilton and Anthony Bourdain.  As always enjoy!