Hé Ho the party is on at Festival.

“Hé Ho, let’s go to festival”,  Darlene said.  Pronounced “Hay Ho” not “Hee Ho”, is just one of the many things a first time visitor to Festival du Voyageur has to learn when navigating the cultural mores that make St. Boniface’s annual winter festival so unique.

That’s right Anglophones leave your English-speaking ways at the gate of Fort Gibraltar, this is a Francophone festivity.  Based loosely on the mid-winter celebrations of the voyageur, this boisterous party celebrates French-Canadian culture and embraces the close bonds of community that only a harsh Canadian winter can bring.

Having won highly coveted tickets to see an invitation only concert by country music recording artist  Shane Yellowbird, we were all set for a night out.  As we left home the temperature was hovering at a balmy -18c but a strong wind decided to play havoc with our plans ensuring that any hardcore partying would have to be done in the relative comfort of one of the event tents set up around Whittier Park.

Having descended back into a deep freeze over the past couple of weeks seemed appropriate for Festival.  Ensuring that all the outdoor events went off without a hitch.  It seems counter intuitive actually wanting frigid temperatures but since so many of the outdoor events are dependant on cold weather not a single soul seemed to mind bundling up before heading out to the park. 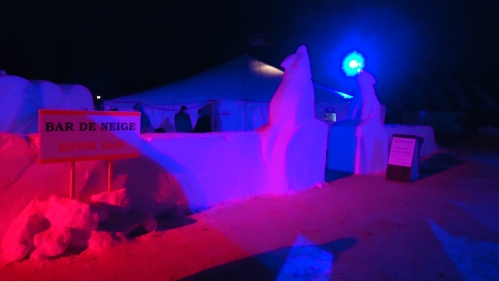 One example is the snow bar, literally an outdoor bar carved out of blocks of snow. Here hearty patrons gather around a blazing fire pit socializing and sharing tales of the festival in arctic conditions.  Many no doubt raising a glass of Caribou, served in a shot glass made of ice. 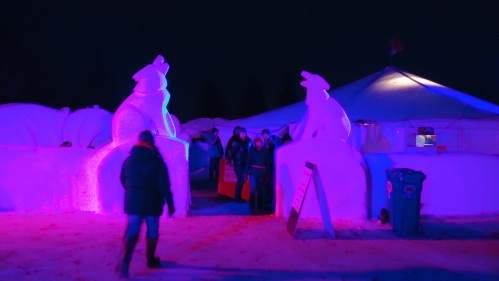 Howling Wolves guard the entrance to the Bar de Neige.

Inside the many tents the party continues away from the cold.  Acts here perform in French and English.  Inside the Cabane à Sucre (Sugar Shack) a hot meal awaits, French-Canadian pea soup and tourtière fill hungry bellies and maple syrup poured on snow to make a maple candy treat serves as dessert.

Warming up inside Cabane à Sucre

Once our bellies were full and we had a good dance to the quirky mayhem of The Magnificent 7’s, we headed back into the cold in search of our next destination before our concert. The night had descended quickly and the cold settled in around the field of snow sculptures that make the Festival du Voyageur a world-class event.  Teams come to Winnipeg every year to create and be judged on their skill and artistry in working snow into temporary works of art.

A pack of huskies pull a sled through the coming night.

Yours truly bundled up against the cold. The field of snow sculptures lays behind me.

The level of artistry and precision here inside the park is mind-blowing.  Working with only snow and ice the sculptors bring fantasy and imagery to life.   For all of you who love the beauty of snow sculpture I promise to post a special pictorial edition in the coming days to highlight the works inside Festival du Voyageur park.

Frozen once again our concert beckoned, a night of country music sponsored by QX-104.  It seems that being part of the QX Nation has its benefits, my girlfriend Darlene always seems to be winning something on the radio contests and tonight’s Shane Yellowbird tickets were no different.

Needing to fortify myself and get into party mode a sampling of indigenous beverages seemed in order.  Every year Winnipeg’s own Fort Garry Brewery makes up a special batch of lager beer for Festival du Voyageur and the fortified Caribou wine is definitely not to be messed with.  Traditionally consisting of red wine mixed with whiskey, the thick liquid leaves a burn as it travels down into your belly.

The opening and my personal favourite act of the night were the local group Keith and Renée.  Their upbeat music has won them acclaim locally and with  phone company AT&T which has featured their song Good Year in a commercial for the company. The song was also chosen as Manitoba Homecoming 2010’s theme song. 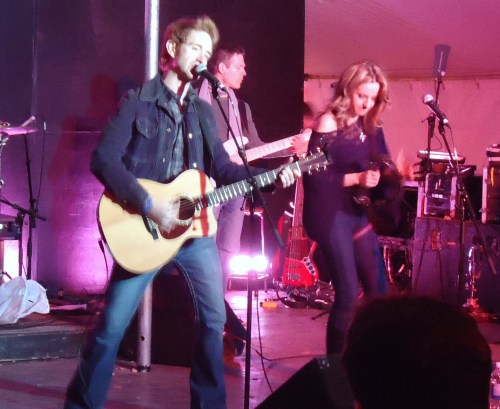 Next up was undoubtedly the ladies favourite and the headliner for the evening.  Shane Yellowbird, dressed in typical country attire threw the party into overdrive, his sly smile and scruffy looks drove girls and women alike to the front of the stage.

The men in the crowd howled a mighty Hé Ho when Yellowbird performed his hit song Pickup Truck . A song that is heavy into the new country virtues of drinkin’ and pickin’ up women.

Shane Yellowbird receives a traditional voyageur sash from the first family of the festival.

As the night drew to a close it amazed me how many people of different walks of life come to Festival du Voyageur every year.  This year guests of Friendship Force visited from Australia and the deep south of the United States.  Everyone getting along and having a wonderful time in learning about the different cultures that make Winnipeg a great place to live. 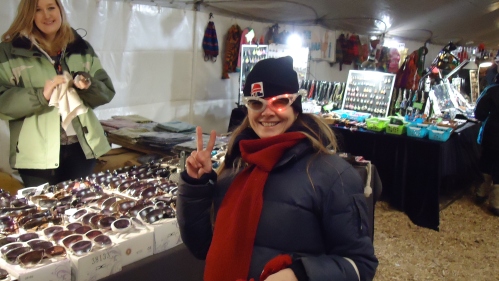 Hé Ho! A Winnipegger having fun at Festival du Voyageur.

Come to Winnipeg, summer or winter we’ll have a big mug of beer together and a hearty Hé Ho in the process!

Now that the work is done let’s watch some videos.

12 responses to “Hé Ho the party is on at Festival.”