Much noise has been made this year about Winnipeg’s home town football team.  The Winnipeg Blue Bombers have been without a Grey Cup since winning in 1990, yep thats 20 years.

Am I disheartened?  Am I ready to throw in the towel and jump on the bandwagon of another team, as the Bombers teeter on the brink of another losing season?  Hell NO!  You can take your Argo Nation or Rider Pride and shove it up your ass.  I bleed Bomber Blue! 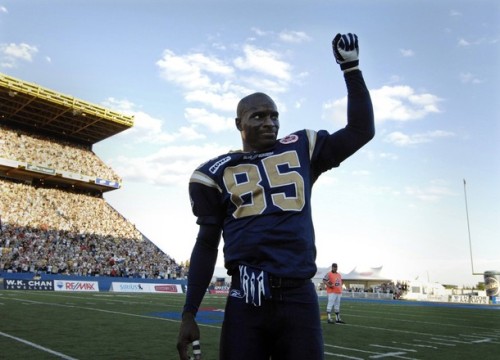 Since the turn of the century I have witnessed the speed of Milt Stegall as he ran into the record books with 144 touchdowns and 15,153 yards.  I have felt the ground shake as Doug Brown smashes through the offensive lines to throw yet another helpless quarterback to the ground.  I have been humbled by the courage of Obby Kahn as he battled life threatening illness and returned to active duty as an offensive lineman keeping our pivots safe from harm.

I was there October 11th in the stands, my beloved team facing mathematical elimination.  The B.C. Lions seemed poised to plunge the dagger into the hearts of the Bomber faithful.  The clock read 15:00 to play.  The score was B.C. 32 Winnipeg 11.  Grim did not begin to describe the mood of the crowd.

But then the tide began to turn, the seemingly impossible slowly became possible.  The Bombers crept back into the game, but surely too little too late.  The packed stadium began to empty out, those of little faith scurried to their cars hoping to beat the rush.  There was no conceivable way the Blue and Gold could win.  “Loser’s” they spat. “Another season down the toilet” they muttered. 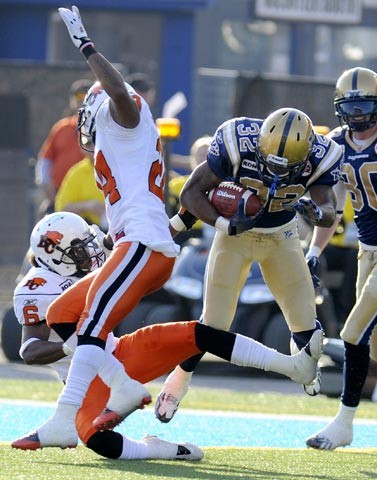 Fred Reid rumbles in for a Touchdown (Photo - Winnipeg Sun)

Even I wondered aloud, “can they do it this time?”  I was about to eat those words, with 10 min remaining the Blue and Gold were only down 10 points. Clawing back against the Lions with tooth and nail. Then with under a minute to play the corpse that was the Blue Bomber’s season suddenly came to life again.  Jovon Johnson returning a B.C. punt deep into enemy territory.  Now down by only 3 points, a field goal would send the game into overtime. 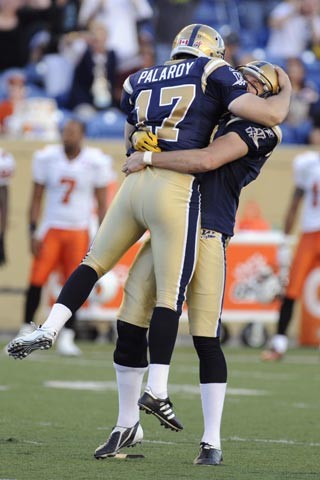 A hush settled upon the now frothing faithful who remained.  Every ounce of will focused on the ball, willing it through the uprights.  We were rewarded, ecstatic.  Overtime was no different, pins and needles pricked everyone’s clapping hands and hoarseness clawed at our throats raw from screaming. 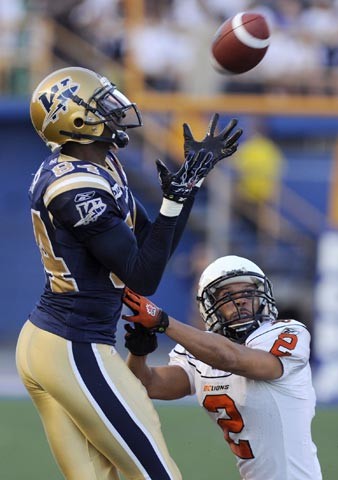 We were sore, we were tired, we were ecstatic, we were VICTORIOUS!

Never Give Up, Never Quit, Blue and Gold Forever.

2 responses to “Blue and Gold Forever!”