For anyone who is a fan of The Tragically Hip the title of this post should come as no surprise.  For the rest of you, sit back as I try to capture the spirit of a Canadian poet, songwriter, musician, wise man and raving lunatic. 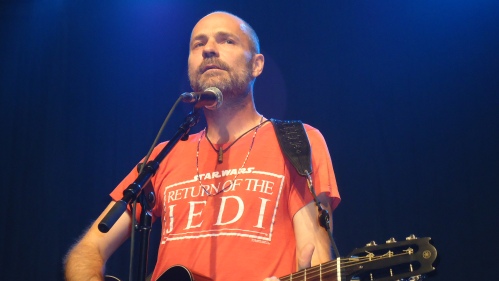 I had the great fortune of being offered a ticket to see Gord Downie and his new band The Country of Miracles last night in concert.  For the record I am a fan of The Tragically Hip and have been so since I first heard the song Little Bones, off the Road Apples album in the early 90’s.  The catchy lyrics and rocking beat lead me to other tracks such as 50 Mission Cap,  New Orleans is Sinking

The enigmatic lead singer Gord Downie has always seemed one step shy of going over the edge into oblivion.  His rambling rants are pure bootleg gold to true fans.  Often degenerating into tales of murder and accidental suicide, or fanciful trips to the bottom of the killer whale tank.  It is in the mind of Downie that the bulk of his bands music and lyrics are born.  Often referred to as Canada’s John Lennon, by DJ Howard Manshine.  His persona dances from a Jim Morrison like madman to a brilliant social architect in a heartbeat on stage.

His lyrics often speak of Canadiana, from the rolling fields of the west, to the lakes and forests of the north.  The land, it’s people and animals take centre stage in a way that I have not heard since Gordon Lightfoot was singing in his youth. The songs unfolding like a storybook.  His words could lead the listener to a sinking ship, or perhaps a prison, maybe a first kiss.  One really ever knows, until the tale is finished.

Last night’s performance with his new band The Country of Miracles showcased the artist in Downie.  Moving through songs of love and loss, the spirit of the land, and even an ode to the tragedy of 9/11.  The ever changing musical chameleon used a simple light and shadow display to add depth to his craft.  Depicting the various scenes on an overhead projector, with a Pink Floyd-esque flair.  Oil and water mixed with dyes to set the scene.

Stopping only briefly to rant about the importance of enjoying the moments in our lives.  A plea not to become archivists peering through a camera viewfinder and missing the essence of the show.  He implored, “Save nothing, use everything. Live in the moment, live in the now.  Use it all up, don’t hold any of it back. Live every moment, save nothing, use everything up!” 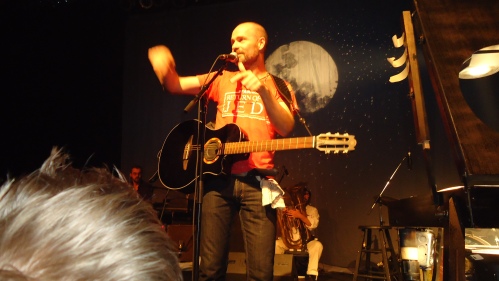 Gord Explaining the Secrets of the Universe (Photo – Robert Ogden)

He asked me, your humble scribe, shouting at me,  just feet away.  “Do you love? Do YOU really love someone?”  I replied “Yes. Yes I do!” Then he was gone, moved on to the next lyric in the song.

A reminder perhaps of how fleeting life is, how we can let those special moments slip away when we least expect.  Cherish every second, keeping it in our memories, imperfect but uniquely our own. It was in that moment I realized yes Gord Downie is a madman.  A hyperactive dashboard Jesus sent to save our souls.  A perfectly brilliant psychopath, and that suits me just fine.

Authors Note: An especially observant reader brought up a good point to me the other day.  The original title was Gord Downie: Canadian Musical Psychopath. And I agree that since his death earlier this year to brain cancer that title was no longer appropriate.  The point I was trying to get across was that when Gord was in full flight on stage no one in the audience had any idea what he was going to do.

I have seen him admonish the audience for taking pictures with cell phones and the next second go on to joke about the Winnipeg Jets.  His rants were the stuff of legend as were his lyrics thus I think it’s entirely appropriate to substitute psychopath with legend.  For my dollar I’d rank him right up there in the Canadian pantheon with Gordon Lightfoot and Leonard Cohen. And that is really saying something about this man.