After my evening out at local tapas restaurant Segovia the other week, I hoped to dig a little deeper in to what made this place tick.   As luck would have it the owners of the trendy eatery in Osborne Village were more than happy to accommodate my request for an off hours chat and photo session.

I arrived just after 3 pm while Segovia was closed between lunch and dinner service.  Luckily Carolina Konrad, Chef Donnelly’s partner spotted me taking photos of the patio area and warmly welcomed me in to the strangely quiet restaurant.

She excused herself and ran off to fetch the man at the helm of the kitchen.  Unimpeded by diners I had a chance to explore the two seating areas.  The first one, a small informal grill area with raised  tables and bench seating overlooked by 5 seats at the grill station. The second being a formal dining area, is richly appointed with dark accents and white tables offers a more traditional experience and seating for 24 guests.

When Adam finally appeared, he offered a welcoming handshake and we exchanged pleasantries.  I introduced myself as having been there the week earlier.  The chef then proceeded to amaze me by telling me what I ate that night.

As we walked throughout the dining area I began to question him on the reasoning behind a Spanish tapas restaurant  in Winnipeg.  He stated that when working in Europe he noticed a level of fine dining fatigue.  People, he continued were getting bored with the white table-cloth prohibitively expensive meals.  Diners on the continent were opting for simply prepared dishes that still offered a level of sophistication at a price they could afford.  When he returned to Winnipeg and found that a building was open in Osborne Village it seemed to be a natural fit.

When asked about his work experience overseas, Adam explained that working in a Michelin Star restaurant under Chef Tom Aikens, his craft was raised to a whole new level.  “Details make or break an award-winning restaurant, that’s the way I insist things are done in my kitchen” Adam emphasized.  “If I get a culinary student I try to bring them to an acceptable standard quickly.  No shortcuts and pay attention to the presentation.  One bad meal can turn a whole table against you.”  ” In a city like Winnipeg word travels fast” I countered, he agreed most whole heartedly.

One of the dishes I was amazed to see on the menu was Roasted Bone Marrow.  I asked Chef Donnelly if that was as a nod to Chef Fergus Henderson of London’s St. John.   He confirmed my suspicions telling me of a meal that he had there.  Fergus, as many of you may know is a chef that loves to cook with offal.  The neglected parts of an animal that too often find a quick trip to the garbage bin.  Liver, kidneys, heart and yes even roasted bones have indeed found a place among Segovia’s dinner specials for those adventurous diners who are open to new tastes and textures.  The trick Adam told me is to work the special cuts in slowly.  Introducing a culture raised on prime cuts to the less glamorous but very tasty bits.

Chef Adam as it turns out, is also a champion of sustainable fishing.  Preferring to offer sardines and mackerel in place of larger more commercially fished stocks.  He explained that the smaller  fishes were actually more culturally correct in the cuisine of Spain and Portugal, so it’s a win win situation.  “Sustainable fishing is good for the oceans and my guests get to taste more authentic flavours from the region.” 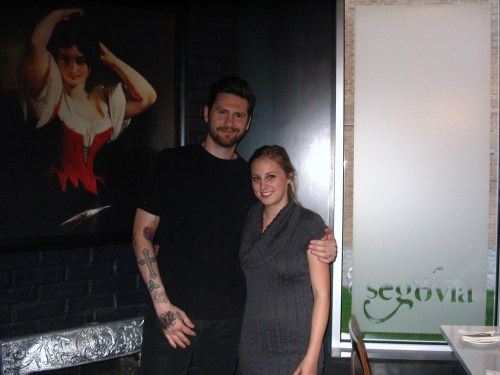 Sensing that I may be taking too much time away from his pre-service  work I asked for one last favour of Chef Donnelly and Carolina.  I asked them if they wanted Winnipeg and the World to know one thing about Segovia what would it be?

The Wine Service at Segovia.

Miss Konrad, spoke up enthusiastically, “We would like to say that fine dining should be fun, here at Segovia we try to have a relaxed atmosphere.  Come down have a few drinks and try a few of our dishes.  Share them with friends! Tapas is all about sharing and having a good time.”

6 responses to “Segovia Revisited: A chat with Chef Donnelly.”