For anyone who has driven down Portage Avenue or into the North End of Winnipeg can attest that this city is seemingly in love with murals.  Back from the early days when the city was the rail and farming hub of Western Canada businesses would paint the names of the company on the side of the building.

Todays murals tend to be in a more artistic vein sometimes promoting a business, showcasing Winnipeg culture, remembering our war veterans, or simply having fun.  The tone of the art also seems to vary from one part of the city to the next.

Winnipeg does have a very diverse set of neighbourhoods and from the rough and tumble North End to the post war housing of St. James.  The city grows out like rings on a tree every layer having its distinct flavour.

Aside from a little commentary on the photos I am going to let the murals do the bulk of the work in this post.  As they say a picture is worth a thousand words after all.

Downtown Winnipeg and the North End.

The Nutty Club Man has been a fixture on the Downtown Winnipeg skyline for decades.  Home to the Nutty Club brand, since the 1930’s.

Welcome to the North End.

Visible from the Salter St. Bridge this rooftop mural welcomes people to Winnipeg’s North End with the saying “People Before Profit”.  The North End of Winnipeg may be a tough part of town but nowhere else will you find a more genuine population of working  class folk.  Once populated heavily by Eastern Europeans the area now is a mixing pot of cultures. 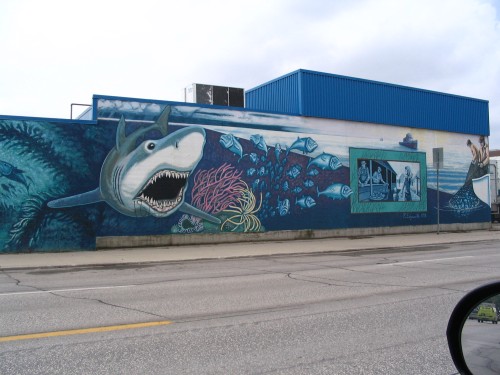 A menacing looking shark graces the outside of Mariner Neptune’s fish market on Dufferin Ave. 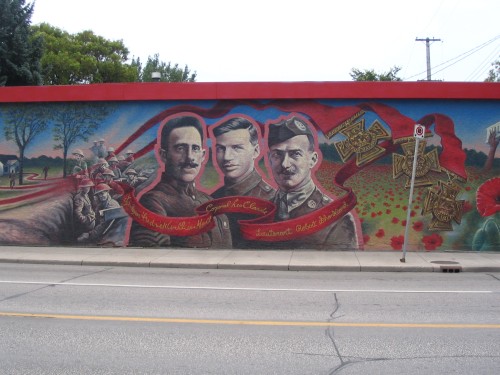 During WW I the young nation of Canada was fighting along British troops in the fields of France.  This mural commemorates three Victoria Cross recipients who lived on Pine Street.  After the war the street was renamed Valour Road in their honour.

This D-Day mural commemorates the landings on June 6, 1944.  It graces the Western wall of the St. James Legion.

Moving back down Portage Ave. to the East, a couple of massive multi-part murals pay homage to the city’s past and some of it’s outstanding citizens.

First we see a dedication to Gar Gillies inventor of the Garnet Amplifier.  The amp of choice for many of the great bands that came out of Winnipeg’s Community Clubs in the 60’s and 70’s. 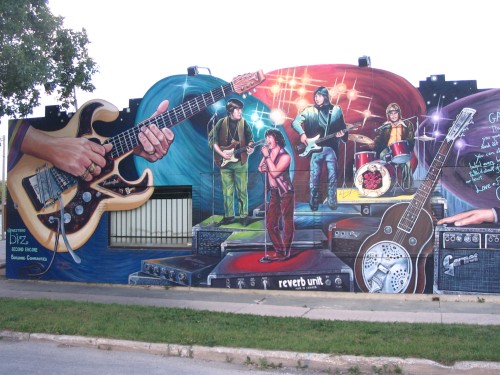 Shown here is a representation of The Guess Who, playing on Garnet Amps.  The Guess Who of course are from Winnipeg and have brought the world such great hits as American Woman and These Eyes. 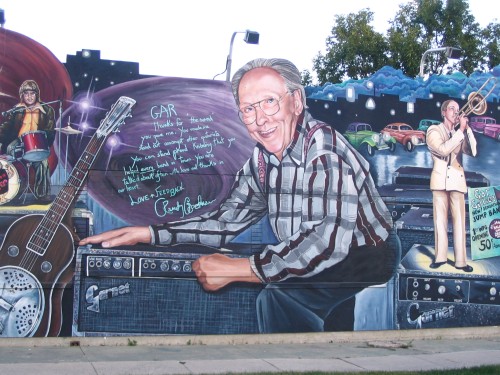 This portion contains a note from The Guess Who guitarist Randy Bachman.  It reads ” GAR Thanks for ‘The Sound’ you gave me. It really made me stand out amongst other guitarists.  You can stand proud knowing it helped every band in town.  You are talked about often with love and thanks in our heart.  Love and Feedback.  Randy Bachman.”

Finally here is one to round off part one of our trip through Winnipeg’s murals.  It commemorates the old Polo Park horse racing track.  Once sitting very near where  the current site of Polo Park Mall.  Today race fans are drawn to Assiniboia Downs on the outskirts of the city on the Trans-Canada Highway West.

Writers Note: Two very good websites chronicle Winnipeg’s cityscape.    If you like what you see here do yourself a favour and check them out.

The Murals of Winnipeg

2 responses to “Winnipeg: City of Murals”