May the Fringe be with you.

Well it seems that Summer has hit Winnipeg at long last.  That of course means many things to many people, to me at least though it means two things.  Vacation time has arrived and so has the Winnipeg Fringe Festival.

Fringe Billboard at the MTC

This year’s theme happens to be a sci-fi based look into The Fringe and Beyond. Meaning that all the advertising and promotion of  the event has a nostalgia based Lost in Space feel about it as does the festival guide and program.  But true to fringe form the shows are on any and every topic under the sun.

So you may very well ask, Bob what’s a fringe festival??  To which I would reply, at its simplest level the fringe fest is a mass coming together of simple live theatre.  It is, for the veteran patron and inexperienced newcomer, an inexpensive and highly accessible way to see a great deal of shows on any number of topics in a short period of time.  The top end ticket price for any show this year is $10, and the shows normally run about an hour in length.

Typical Turn of the Century Architecture in the Exchange District

Based in the heart of Winnipeg’s exchange district almost 100 independent theatre companies put on 155 different acts over 11 days in 24 venues. Whew, now that’s a mouthful.  All centred  around Old Market Square.  The park serves not only as a gathering point for Fringers in the beer gardens but also acts as the free live stage area for kids acts.   It is also where the main act board is updated so people looking to take in a quick show can come and see what’s up next at any of the venues. 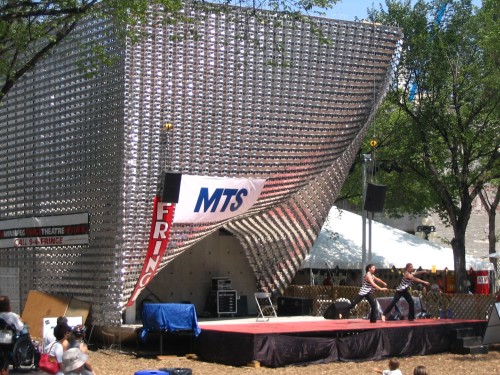 As I alluded earlier, the performances run the gamut from dark serious topics such as abuse or dealing with disease to the outrageously silly.  The troupes are placed by lottery into the venues and schedule assuring that no matter what the topic every group gets a fair shot at an audience.

Speaking about the audience, I have found that in picking which shows I will attend on any given day I simply grab my program and head to the beer tent and strike up a conversation.  Winnipeggers are notoriously friendly and will gladly advise you on which shows they have seen and what they think you should see.  The only other time I have seen a populace so eager to persuade was in New York where it seems everyone wants to advise a traveller on where to eat.  Thus it is at the Winnipeg Fringe, you can always count on getting an honest heartfelt opinion on what shows to see and which ones to avoid.

So if you find yourself in Winnipeg near the end of July, feel free to grab a beer, chat up a local and plunk down ten bucks to take in a show.  You may be moved to tears or wet your pants with laughter.  Just be sure to pass on what you saw to the next person in the beer tent.

May the fringe be with you….. Always.

This entry was posted in Winnipeg and Hometown Goings On, Winnipeg Events and tagged Independent Theatre, Lost in Space, Manitoba Theatre Centre, May the Fringe be with you, MTC, Old Market Square, Summer in Winnipeg, The Cube Stage, The fringe and beyond, Winnipeg Exchange District, Winnipeg Fringe Festival. Bookmark the permalink.