I guess that this past weekend has given a great deal of my readers a blanket of snow to deal with.  Here in Winnipeg we had a little snowstorm, only about 20 centimetres.  Nothing compared to what happened on the East Coast of North America. From what I understand some parts got upwards of 70 centimetres of the white stuff.

For the record,  amounts like that would even paralyse Winnipeg for a day or so.  Well… ahem.. without further adieu.  More snow!!!

Leaving The Forks Market I just had to take a picture of the tower, the Canadian flag flying proudly in the winter wind.

Canadian Flag Flying at The Forks

Just a little side note for those that are curious.  Winnipeg, having once being a major rail hub has many turn of the century railway buildings and rail yards.  Prior to becoming the shopping and tourist mecca that it is today, The Forks site was a run down industrial area.

In the early 90’s an effort was made to reclaim the land for park and commercial use.  As you can see it has been an overwhelming success.

The Johnson Terminal Building at The Forks

Anyone want to build an Igloo??

Getting back on the road, I knew of a few more snow sculptures that were in the process of being built.  This first one is in Honor of Winnipeg’s own gold medal Olympic speed skater Cindy Klassen.  She will be competing once again at the 2010 games in Vancouver. 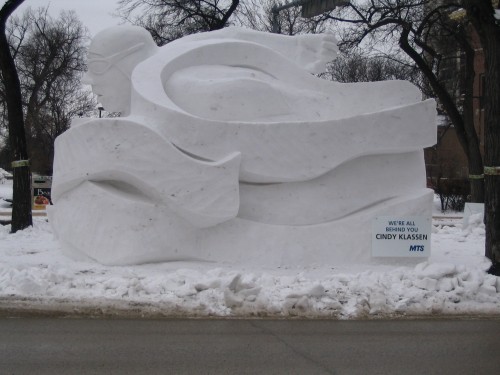 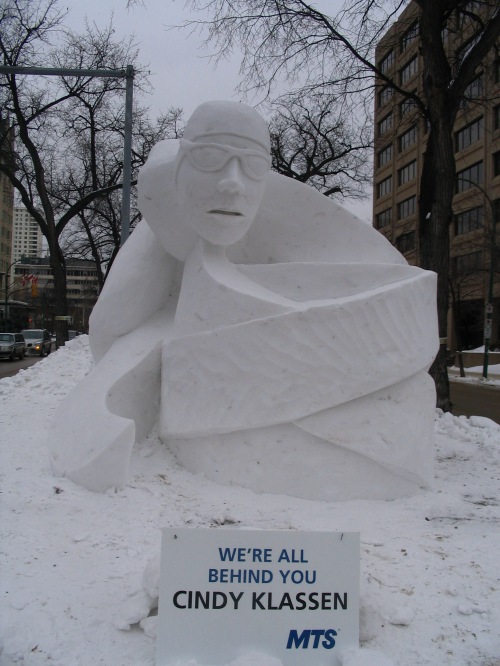 Just steps from the speed skating sculpture is the crown jewel of historic Winnipeg railway hotels.  The Fort Garry Hotel, constructed in 1913 by the Grand Trunk Pacific Railway.  The hotel besides being one of the more lavish places to stay while in Winnipeg also has the reputation of being haunted. 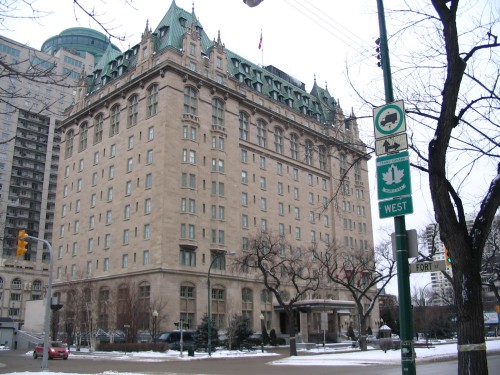 A little drive further down Broadway, I happened upon a snow sculpture in process.  The man working alone on the huge sculpture informed me that it was a likeness of  local radio personality Ace Burpee. Personally I can’t see the resemblance but I took him at his word. 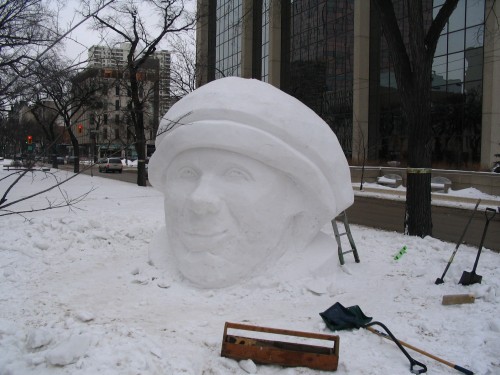 Satisfied, with my days progress I turned my Jeep around and headed for home.  Hoping to chance across a few more winter scenes.  I thought to myself the burned out St. Boniface Cathedral would make a good backdrop for a few pictures.  Ravaged by fire in 1968 the remaining building still serves as an imposing part of the St Boniface skyline.

St Boniface Cathedral from a distance 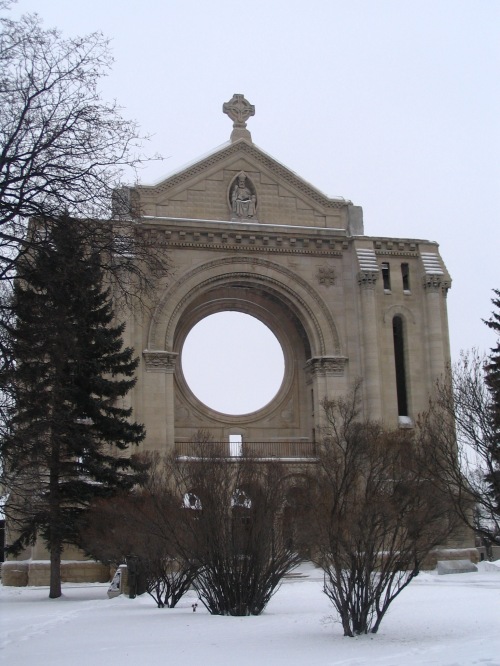 Winnipeg, being founded by European fur traders in the 1700’s still has many trappings of its early roots.  For example, the French Quarter of St Boniface, where the French language is still spoken very heavily and the majority of the residents are proudly Roman Catholic.

Christ in the Snow

Crucifix in the Snow

History Buffs will want to take note, the de facto founder of the Province of Manitoba. Louis Riel, leader of the provisional government and leader of the Metis rebellion.  Hanged as a traitor in 1885 lays today resting in the capital he established. 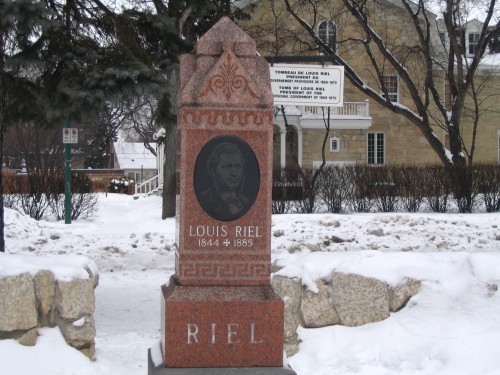 Instead of finding frozen panic-stricken horses I found a group of Ice Climbers practising their art of climbing a sheer frozen tower. YIKES!

Still a Long Way to Go 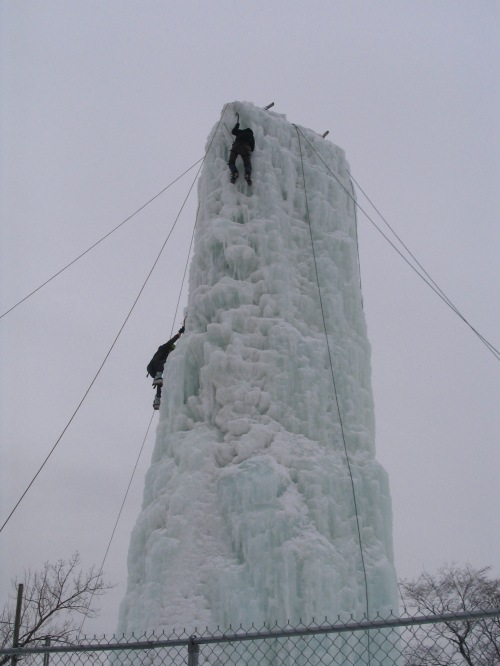 Obviously this winter activity is not for the faint of heart. The sheer ice tower is about 70′ tall and frozen solid.  Spikes on the boots and climbing picks are the only thing that make this frozen assent possible.

So many things coming up in the next few weeks, the Winter Olympics, Festival Du Voyageur.  Plus my regular rants and odd looks at life.  Make sure you stay tuned for what promises to be an exciting February!!