Rock and Roll Hall of Fame…Finale

Looking at the playbill after Jeff Beck had left the stage I noticed that we only had two more headliners to go,  Metallica and U2.

With appropriate heavy metal bluster Metallica took the stage with ear-splitting prowess.  Originally the organizers of the event wanted Led Zeppelin to carry the hard rock part of the show and were pretty much turned down flat by the remaining members of the group.  Thus it came to be that metal’s chosen heirs came to New York representing  every thing that embodies teenage angst and rebellion.

Opening with For Whom the Bell Tolls, the heavy drumbeat thumping into my chest with some force. Then into One and Turn the Page, before bringing out New York Native Lou Reed.

By their own admission Metallica does not play well with others, and did not automatically grasp the “Jam” concept for the show.  However when they learned whom they were to be teamed up with it all made sense, claimed lead singer Lars Ulrich.  It was their job to become the backing band for their Rock and Roll Elders.

Lou Reed emerged onto the stage in a Deja Vu invoking cheer of “LOOOOO”, thinking back to the “BOOOO’s” that greeted Bruce Springsteen the night before.  He appeared totally at ease with Metallica and the crowd as he lead  off with Sweet Jane.  White Heat/White Light followed in a similar rocked up fashion. 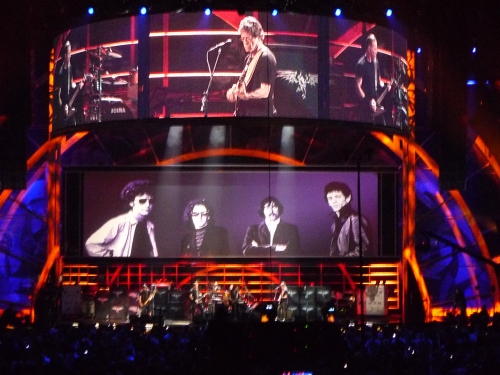 A surprisingly agile Ozzy Osbourne was up next peppering the stage with liberal “F-Bombs” launching into a crowd favourite Iron Man.  Ozzy really did look at the top of his game, jumping around the stage at one point even having to stop to look for his glasses which had flown off due to his exuberance. 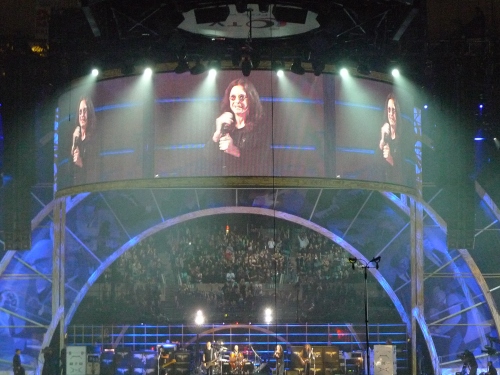 The Next guest really schooled Metallica in “Early Riff Rock” says Lars Ulrich, Ray Davies strutted on stage singing You Really Got Me and All Day and All of the Night.  Although his time on stage was brief Davies took advantage of every moment putting the boys of Metallica though a 60’s style workout.

After a short break the last band of the night was due to hit the stage. Whispers circulated through the crowd, another surprise guest was in the building.  Seeing that the headliner of the event was U2 any guest of the band must be truly stellar.  Names flew about, was it Paul McCartney and Ringo Star for a Beatles reunion?? Were the Rolling Stones going to blow us out of the auditorium??  No one knew for sure.

Uno, dos, tres, catorce. With a flash of light U2 were on the platform belting out their hit Vertigo, following quickly with Magnificent.

The guests started early and came often in U2’s set, Bruce Springsteen sharing the mike with Bono and Patti Smith for Because the Night, which actually had to be performed twice due to a weak lead in by U2. Youtube offers the uncensored version of the song not shown on HBO. Bruce stayed on stage for I Still Haven’t Found What I’m Looking For.  Before U2 moved  into a funky version of Mysterious Ways/Where is Love joined by the Black Eyed Peas.

Fergie, mounted a riser and began to wail, swaying her hips back and forth seductively to what was obviously not a U2 song.  Bono and the band all turned stage right waiting, strumming on the guitars.  The strains of Gimmie Shelter filled the room and the crowd went ballistic.  Mick “Freaking” Jagger was in the house!!!  I glanced over at Darlene, twisted grin filled my face as I grooved to the pulsing beat. 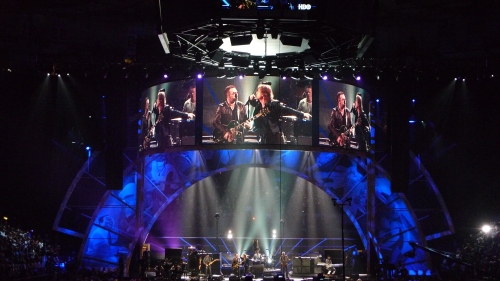 U2, Fergie and Mick Jagger

The band meshed perfectly with Jagger’s staccato lyrics on Gimme Shelter before moving into a U2 classic in Stuck in a Moment You Can’t Get Out Of.  Breathless from three days of excitement, the show finally came to its final curtain as U2 kept the weary masses on their feet for a solo version of Beautiful Day.

The sound ringing in our ears, as we joined the streaming horde leaving the Gardens I knew that what we experienced was a once in a lifetime event.

Thank You New York for a wonderful couple of days indeed!! 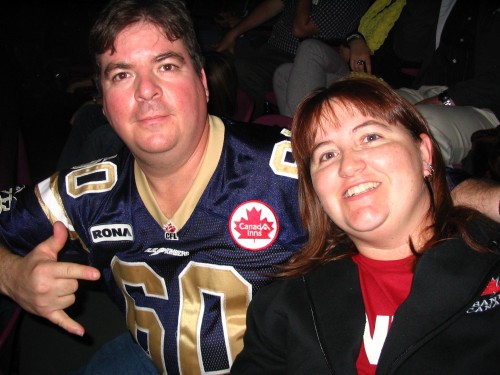 Rocking out at MSG

2 responses to “Rock and Roll Hall of Fame…Finale”