After Simon and Garfunkel finished taking the audience on a whirlwind trip back in time another short break was required to prepare for the next act.

Stevie Wonder, was led to his electric piano to a welcoming applause, the house lights dimmed and his backing band filed in behind. Everyone was ready for a rocking ride on the soul train.  Stevie assumed his standard pose behind the keys rocking rhythmically, apparently to himself.  Something had gone terribly wrong the man had no sound!  Time Passed as techs raced around the stage checking cables.  Stevie, visibly agitated, began tapping his mike listening for any hint of sound.

After what seemed like an eternity, Stevie’s Piano came to life.  He smiled as he brought the mike to his face.  “Aw Shit, Stuff Happens” he pronounced, his backing band still without power.  So being the true showman that he is, he starts in to Blowing in the Wind with what little back up he has.

Stevie Wonder with No Sound

His upbeat nature saved what could have been a public relations nightmare, as an artist of lesser caliber may have walked off the stage. Once the band was up and running he continued with the hits. Uptight (Everything’s All Right), and Signed, Sealed, Delivered I’m Yours were the highlights of the first part of his set.

Stevie’s first guest was Smokey Robinson who performed a soulful rendition of The Tracks of My Tears.  Next came up and comer John Legend who shared piano duties on Mercy Mercy Me and a Michael Jackson inspired version of The Way You Make Me Feel.  Regardless of the way the audience felt about the passing of Jackson one could not help but feel moved by the grief displayed by Stevie. At one point during the song he actually broke down in tears unable to sing, and leading the crowd in a chant of “We Love Michael, Long Live Michael” this part was edited out of the HBO performance shown on television.

Thankfully BB King, saved the show from sliding into a tribute act, with The Thrill is Gone. Followed by a surprise appearance from Sting, who led the audience in an Eddie Murphy inspired sing along of Higher Ground/Roxanne. 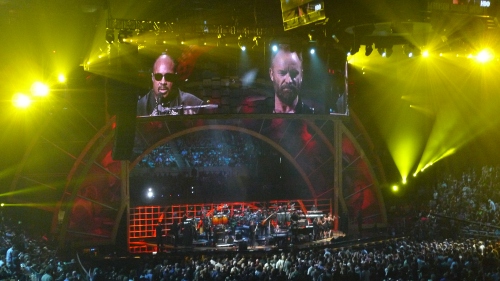 To wrap up his show Stevie and Jeff Beck tore through an amazing rendition of Superstition, Beck’s screaming guitar playing counterpoint to Wonder’s funk on the electric piano.

One thing that you must understand is by this time we had danced and singing almost non-stop for almost 5 hours, as the time inched ever closer to midnight.  The crowd began to visibly thin, as weary New Yorker’s headed to the exits in ones and twos.  Sporadically what I thought was a “BOO” emanated from the floor. I quickly realized what they were shouting was “Bruuuce”.

When the stage finally rotated back around, a silent electricity filled the room. The Man was in the building, The Boss was ready to take the stage. 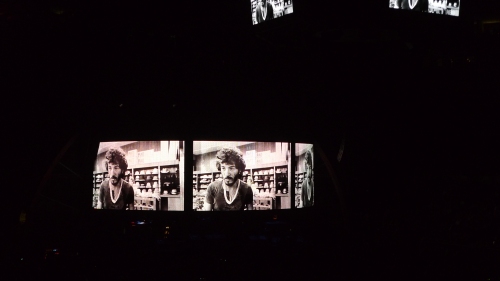 Film Before Springsteen Takes the Stage

Calling the applause deafening when Bruce took the stage hardly describes the pandemonium that engulfed the crowd.  Having never actually seen Bruce and the E-Street Band before, I was quickly schooled on why he is called “The Boss”.  The mans stage presence is undeniable, he does not simply walk, he strides across the planks like a General before his troops.

The band came to life with a simple gesture belting out 10th Avenue Freeze Out, and then into  Hold on I’m Coming and Soul Man with guest Sam Moore. A tricked out version of The Ghost of Tom Joad, showcased the guitar prowess of Rage Against the Machine’s Tom Morello. The way Tom squeezes out the sounds he does is akin to listening to a virtuoso in the picking arts. 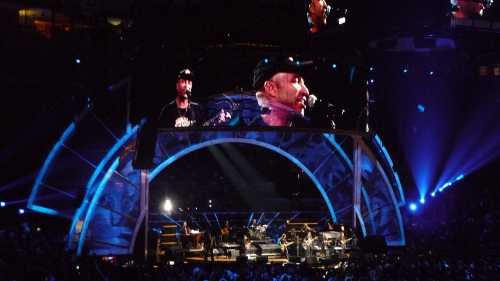 Tom Morello with Bruce and the E-Street Band

Apparently he wanted to even pick the strings on his guitar with his teeth, but Bruce decided against it.

Next up in the seemingly endless procession of artists came John Fogerty, his antiwar anthem Fortunate Son leading off his set with Bruce.  Next came Proud Mary and a tribute to Roy Orbison with Oh, Pretty Woman.

A segue into Jungleland, marked the midpoint of the E-Street set, as we were forced to take a breather. Then right back into it, as Bruce introduced Darlene Love for A Fine, Fine Boy and Da Doo Ron Ron.

By the time when any sensible artist would have called it a night and gone home Bruce decided to host a summit of sorts. A meeting of the musical minds of Jersey and Long Island.  Bringing out  local son Billy Joel.

Billy hit the keys running with You May be Right and Only the Good Die Young, slowing down briefly to get into a New York State of Mind.
Our seemingly exhausted legs gave one more push as Bruce and Billy teamed up for Born to Run.

Looking at my watch the time read 1:20 as the collective cast from Bruce’s set came out to do (Your Love Keeps Lifting Me) Higher and Higher. The time was now 1:30 as the half empty gardens emptied.

Rock and Roll history had been made and we were witness. Parched and sweaty, as we walked the four blocks back to our hotel. We had a early wake up scheduled in the morning and yet more history to be part of the next evening.

We were tired and beaten, but not broken and definitely ready for more!

6 responses to “Rock and Roll Hall of Fame: Night One..Part 2”