Rock and Roll Hall of Fame: Night One

Hey there, sorry it’s been a while had to thaw out my brain here. The temperature has hovered somewhere around the mid -30’s C here the last few days so it takes a little to get me motivated to write.

So without further ado, just for you Adele, the story of night one.

As luck and a good travel agent would have it, our hotel was located only about 4 blocks from Madison Square Garden.  As we walked from the hotel, the foot traffic increased exponentially.  “Looks like the show is Sold Out.”  I mentioned to Dar, as we got closer. The inevitable scalpers popping out of the crowd as if by magic, “Need a ticket, Selling a ticket?” they queried seemingly not caring if law enforcement was listening.

Clutching my ticket in my hand checking for the entrance information, I smiled as I saw our seat location Section 102, Row C, Seats 11 and 12. Price to buy $247.35 per seat… WOW.  As we fought through the crowd, the signs blazed over head announcing a sold out performance.

Once inside the climb began, up 3 flights of escalators and into the concourse, of course being a Canadian a beer was in order. Word to the wise, a glass of Bud cost $9.00, so don’t plan on getting drunk unless you have very deep pockets.  Clutching my one and only beer of the evening as tightly as my ticket we descended into the lower concert bowl of MSG.

The place was smaller than I had originally envisioned it, and our seats turned out to be in an excellent location near the aisle and high enough not to be bothered by people standing on the floor of the arena.

The stage was open, set up like a turn table so that while one act was performing on the front half, another set of gear could be assembled behind the scenes and rotated into place without much delay or fuss. A wooden archway framed the performance area, images of Rock Icons adorning its sides. 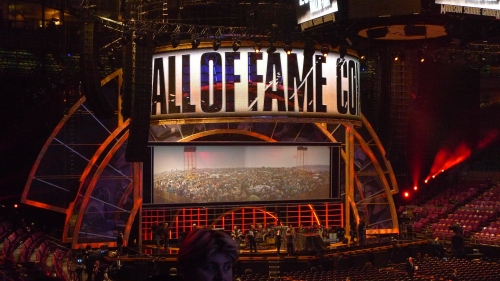 Shortly after 7:30 the house lights dimmed and Tom Hanks strode onto the stage.

With thunderous applause, The Killer himself, Jerry Lee Lewis began banging on the keys as only he could. A whole lot of shaking was definitely going on! What can I say about the this legend of Rock and Roll?  The man is most certainly getting on in years, but his enthusiasm and obvious joy to be there that night would set the tone for the evening and the night to follow.

Next up came Crosby, Stills and Nash a series of wartime images flashed on the screens as the strains of Woodstock and the scent of reefer filled the air.

Woodstock blended into Marrakesh Express and Almost Cut my Hair effortlessly, Bonnie Raitt was introduced and sang Love Has No Pride and Midnight Rider with the boys.

Not to be undone Jackson Browne belted out The Pretender with uncanny precision using CSN as his backing band. Honestly how many artists can just walk out on stage and command David, Steven and Graham to do his bidding??  Jackson  Browne that’s who, well Jackson and James Taylor.

Taylor, strolled on stage an acoustic 6 string in hand, and led the boys through Mexico and Love the One Your With, in a way that would not have seemed out of place in a coffee house.

CSN, wrapped up their set in sing along fashion bringing out Raitt, Browne, and Taylor. Everyone in the capacity audience sang as best they could to a rousing version of  Teach Your Children. 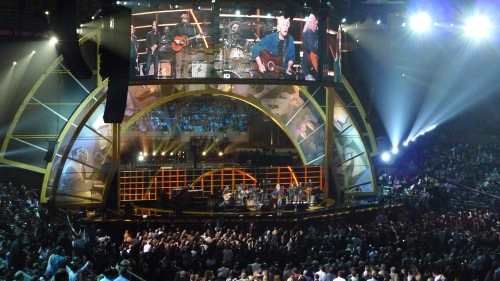 After a short intermission break to stretch my legs, I heard the unmistakable African rhythms of Paul Simon’s Classic  Diamonds on the Souls of Her Shoes.
The concert had just begun and already I had seen more rock history than I had earlier in my 40 years on this earth. I raced back to my assigned spot, grinning ear to ear as I let the tribal beat take me in dance.

An impromptu Do Wop session broke out on stage when Paul Simon welcomed Dion to the stage as he performed a 50’s classic, The Wanderer. Two People in the World rounded out a well deserved nod to the 50’s,  Paul Simon watching from the wings as Little Anthony and the Imperials performed a cappella. 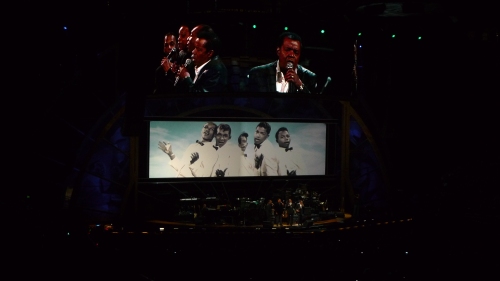 Little Anthony and The Imperials

What would Paul Simon be without Art Garfunkel??  Well we didn’t have to wonder. Because He was there too!! The reunion of the old friends was one of the highlights that I will never forget.  Being a fan of the mellow smooth sounds that were their trademark, I was not disappointed.

I sat awestruck as the pair matched harmonies for The Sound of Silence, Mrs. Robinson/Not Fade Away. Hit followed hit, there was not a dull moment as they continued their set with Bridge over Troubled Water and got our toes tapping as they concluded with Cecilia. 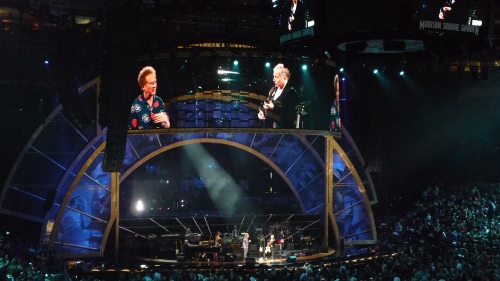 All of this became part of our collective memories, and the night was just getting going… The best was yet to come!!

Authors Note: For a full recount of the Concert with an annotated set list do yourself a favor and pick up Rolling Stone Magazine Issue 1092.

4 responses to “Rock and Roll Hall of Fame: Night One”