Hi there again… As you may or may not know my Significant Other and I, were fortunate enough to have won a trip to New York City and a chance to take in the concerts to celebrate the 25th Anniversary of the Rock and Roll Hall of Fame!!

I have promised to post a tale of our trip for some time now so I will begin at the beginning.

Being a long time listener to 92.1 CITI fm here in Winnipeg I am used to hearing the big concert and trip announcements that the station gives away during ratings periods. But it really floored me to find out that they were giving away a once in a lifetime trip to see the gathered members of the Rock and Roll Hall of Fame perform “Jam Style” at Madison Square Garden.

I immediately had to get in on this opportunity, placing a number of entries into their VIP Club system.  As the weeks went by I had a “Lucky” feeling that we were going to win, and as it turned out we were picked to go into the last round of entries on my 40th Birthday in September.  That sealed it I figured we were a lock to win the big prize.

By coincidence the day of the draw I was home for work,  I told my Girlfriend Darlene to make sure her cell phone was charged and on ready for the inevitable call. She looked at me bemused, but I was unshakable we were going to win…  As promised her phone rang at the appointed time, she was sure that I was pulling her leg.  But when she answered my dream had come true. We had actually won an all expenses trip to New York.

We were put up scant blocks away from Madison Square Garden and the Empire State Building. 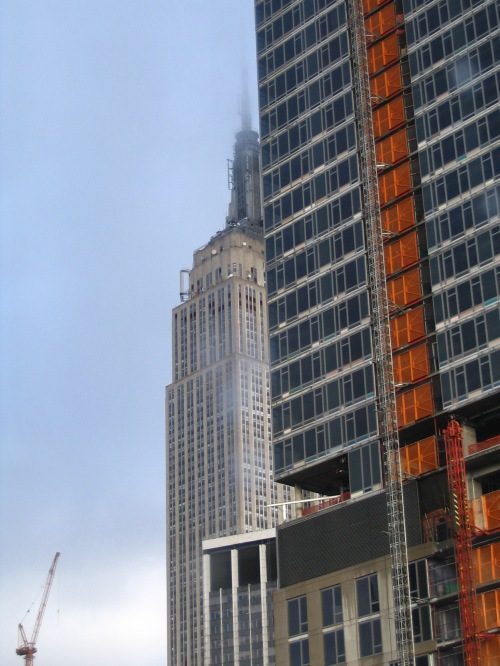 Once on the ground in New York we settled into the busy surroundings, apprehensive of how the city and its inhabitants would treat to uninitiated Canadians.  The first order of business was Dinner at Les Halles, a French brassiere on park ave. The very same restaurant in fact where a budding author named Anthony Bourdain wrote a book he thought no one would read called “Kitchen Confidential”.  A book that would launch him into the world of travel television and celebrity.

Quite by surprise we were invited into the kitchen by our waiter Tim Siemens to meet the current head chef Carlos Llaguno. Having been a fan of the restaurant for some time I was flabbergasted by our luck.

In the Kitchen at Les Halles

As we walked back to the hotel from an amazing dinner the Empire State Building loomed glowing above us… And we hadn’t even gotten to the best part yet!!!

The Empire State Building in the Mist